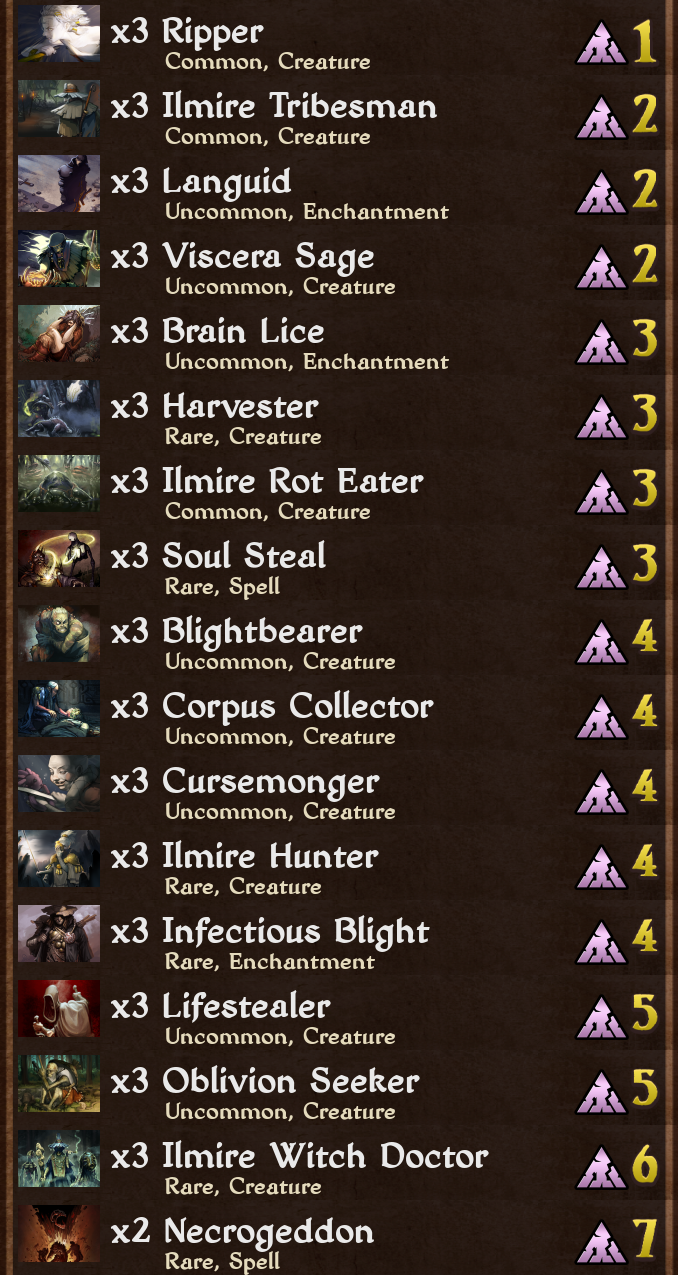 The theory of this deck is to establish board control by utilizing the superior retentive capability of Decay creatures, while also limiting opposing board control through the use of spells or enchantments. After board control has been established, sacrificing up to 7 resources and using Necrogeddon allows for the conversion of that board presence into a winning advantage.

I shall explain why each card fits within the theory of this deck by turn.

Ripper: the human aspect of this card is important for retaining board presence when used with the Ilmire Witch Doctor. All other human cards in this deck similarly are more retentive for this reason. The Ripper has relatively good stats for a 1 cost creature, and is good for establishing an early board presence in the center. I think controlling the center might be good for board control, but that's just me. This creature can be played on the middle or front rank, depending on if there is a creature with more health that can protect the Ripper.

Viserca Sage: Now you might be thinking, "Why would you play this card instead of Loyal Darkling?". Well to that I say, I would rather have the potential for drawing more cards than guaranteed idol damage; drawing more cards expedites the deployment of creatures onto the board due to our increased ability to sac for resources more often, or having more cards to play than we would otherwise. The threat of drawing more cards is something our opponent has to work around, thereby increasing our control of the board. So even if our opponent prevents us from drawing more cards, they must do so at the cost of board control. In order to obtain the most value from the drawing effect, this card should be played in the back rank.

Languid: If opposing creatures can't kill our creatures, our creatures will remain on the board longer. Some of our creatures can benefit from killing a languid afflicted creature like the Corpus Collector or Lifestealer or Viscera Sage. The languid creature just takes up space and prevents our opponent from using that space to better control the center or other contested areas of the board. The card also lets us draw while it's still our turn, allowing for greater flexibility in choosing the deployment of our creatures.

Ilmire Tribesman: The main function of this creature is a wall, which is especially important early on for protecting a Viscera Sage or Corpus Collector. The high health of this creature ensures its greater potential to remain on the board longer than alternative choices, which makes it better for our plan of establishing board presence. Since this card functions primarly as a wall, it should be played in the front rank.

Harvester: With the amount of board presence we're committing to, typically a lot of creatures die from either side, making the Harvester an atypically active contributor for re-establishing board control. Typically this card is played before a turn where creatures are going to die, which can be earlier skirmishes, or, more typically, later in the game when there's more creatures that can die. Since it actually takes creatures dying to attack a creature on the back rank, there's a good chance that a Harvester on the back rank may be able to attack and save itself if placed there, as compared to the potential of a Harvester on the front rank; the Harvester belong on the back rank.

Brain Lice: Since there are many "on kill" effect creatures, as mentioned when describing the benefits of Languid for this deck, Brain Lice works to ease the process of activating those kill effects by slowly but surely reducing the health of pesky, annoying enemy creatures. Think of this card as greasing the wheels of the deck's plan; it's able to target creatures in the back ranks which pose a serious threat to keeping our creatures on the board, since otherwise creatures protected on the back rank would likely be able to attack many times before finally being brought to justice.

Soul Steal: There are a lot of 2 health creatures played in the early game, which is great for us because this card not only prevents enemy board presence but adds to our own. This card enables us to solidify our control of the board early on.

Ilmire Rot Eater: This creature is good for retaining board control because it benefits when our own creatures die. Typically the ability to confer benefits onto active units as opposed to creatures just dying is indicative of maintaining threats that can then be converted once again into a superior board presence. This creature should be placed on the middle rank, since it's probably surrounded by more creatures that can die.

Blightbearer: This card may not be able to retain itself on the board because it damages itself upon attacking, but, more importantly, it controls rows remarkably well, since any creature that destroys Blightbearer takes poison damage. This has a few implications, but to name a few, it can lower a creature's hp below 3 for a Soul Steal, or become cursed by the Cursemonger, ensuring a swift death. Blightbearer is a great card for furthering the potency of "on kill" effect creatures or some spells. Because of the threat of poisoning attackers that kill it, Blightbearer should be played on the front rank.

Infectious Blight: This enchantment limits the board presence of the enemy by slowly killing off all their creatures. It's effect can be magnified by the Cursemonger or Brain Lice. The enemy really has to work to make this card not pay for itself by killing one creature. Because our army is based on retaining its numbers, Infectious Blight is useful for winning wars of attrition, should they arise.

Ilmire Hunter: This card can serve as a wall, but also can serve as a way to dispatch powerful enemy creatures. Due its sheer killing power, this card solidifies board control for the middle stage of the game. Since this card has so much sway over board control, it's optimally placed in the middle rank, where it's mobility is more flexible until room for an Ilmire Witch Doctor must be made.

Cursemonger: The fact that Cursemonger can apply a curse 2 to any creature it sees fit, and the fact that several enchantments and spells are better used with curse 2, means that Cursemonger enhances those effects for the middle to late game, and effectively deals with back rank protected creatures that could threaten board domination. Curse 2 also means that "on kill" effects are more accessible, making several aspects about the deck more efficient. Overall, this unit, which should occupy the back rank, offers the flexibility to regain or improve board control in many different situations.

Corpus Collector: This card might be the most efficient card with respect to this deck's objective; the "on kill" effect not only gets rid of a creature, but spawns a Husk as well. Soul Steal has a similar function, but it only works on creatures with 2 or less health, while this works on creatures with 4 or less health. Additionally, Corpus Collector continues to be active on the board after the similar effect to Soul Steal happens. Now that is what I called efficiency. Obviously prolonging this creature's existence is paramount, and so Corpus Collector should be placed on the back row.

Lifestealer: When I think of creature retention, this creature stands out as one of the best examples. It's hard to gain superior board control when you have to fight a creature that can effectively have double its health if played correctly, if not more. Sometimes Lifestealer should be on the front rank and sometimes it should be repositioned until it can kill and heal itself; so, Lifestealer should ideally have access to the middle rank to be most effective.

Oblivion Seeker: This card can either be allowed to attack or be destroyed and allow you to draw 2 cards. Harvesters, Rot Eaters, and Witch Doctors additionally benefit when Oblivion Seeker dies. The extra draws are important at this stage of the game, since around this time is when saccing up to 7 resources and trying to draw Necrogeddon is the primary objective. Oblivion Seeker should be placed in the front rank.

Necrogeddon: After we've established board control, Necrogeddon can be used to clear the board of enemy units or attack idols and win the game.

In conclusion, the scrolls chosen for this deck accomplish the plan of the deck, and since those scrolls are so focused on board control by greater unit retention, and since other factions cannot as easily accomplish this same retention, this deck works great against less focused decks, or decks that cannot generate threats as fast, late game decks being the prime example.