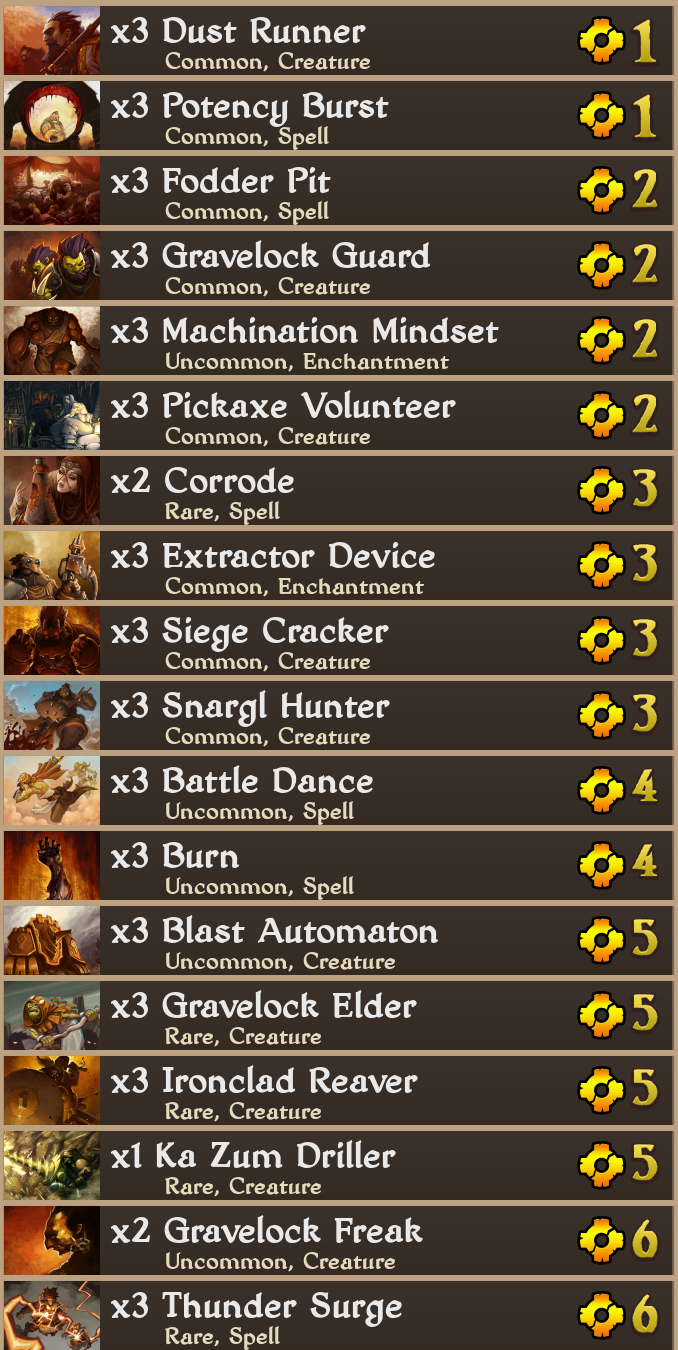 What started out as a "screw the meta" deck has become by far my favorite deck to play.  It's definitely one of the more diverse momoresource decks out there in terms of scroll types and l abilities, and while it does have some nice scroll comboing power, it doesn't lean heavily on a single scroll combo, making it adaptable to different opponents.  My choices for scrolls are explained below.

Dust Runner: With the possible exception of Ripper, this is almost without a doubt the strongest 1-drop in the game.

Potency Burst: When this scroll was first announced, I thought, "Really?  More removal?"  But its flexibility is insane compated to Spark and Violent Dispersal, making it useful in all kinds of scenatios.

Fodder Pit: This scroll is bugged, it's actually only Linger 4.  However, considering Reaver's Treaty is also bugged in that it affects both sides and bricks the AI when played, this is the better choice.

Gravelock Guard: A Gravelock for the Elder with Pillage for Fodder Pit.  A strong turn 2 play.

Machination Mindset: I don't end up playing this scroll very often, but it's saved my life quite a few times.

Pickaxe volunteer: This scroll is AMAZING.  The it has 3 Health, 3 Attack, and can bring an idol to within 1-shot range.

Extractor Device: If the opponent moves away and you have something attacking an idol, this is a good scroll.  It also synergizes with Fodder Pit.

Siege Cracker: Now a 4-Health 3-drop, Siege Cracker is good at getting opponent units to move into its lane.

Snargl Hunter: Surprisingly, I've found this scroll to be more useful than Gravelock Outcast.  Energy doesn't really have any killer 3-drops, so I just went with this one and it's been working so far.

Battle Dance: The only CDR in the deck.  This deck has enough units that you shouldn't find it hard to connect all of them.

Gravelock Elder: A ranged 4/2/5.  Also brings your Guards out of Kinfolk Veteran/Burn range and makes your Freaks that much more formidable.

Ironclad Reaver: A melee 4/2/5 with Pillage.  A scary sight with Mach Mindset.

Ka Zum Driller: For taking down idols early; the anti-Late Game sctoll.  When I first made this deck, I only had one in my library, and the deck's been working fine, so I haven't bothered to add in any more.

Gravelock Freak: Like Blast Auto, a big bad wall.  Except no blast ability, no Armor, melee attack, more Health, more Attack, can be buffed by Elders, and has a nice CDR ability.