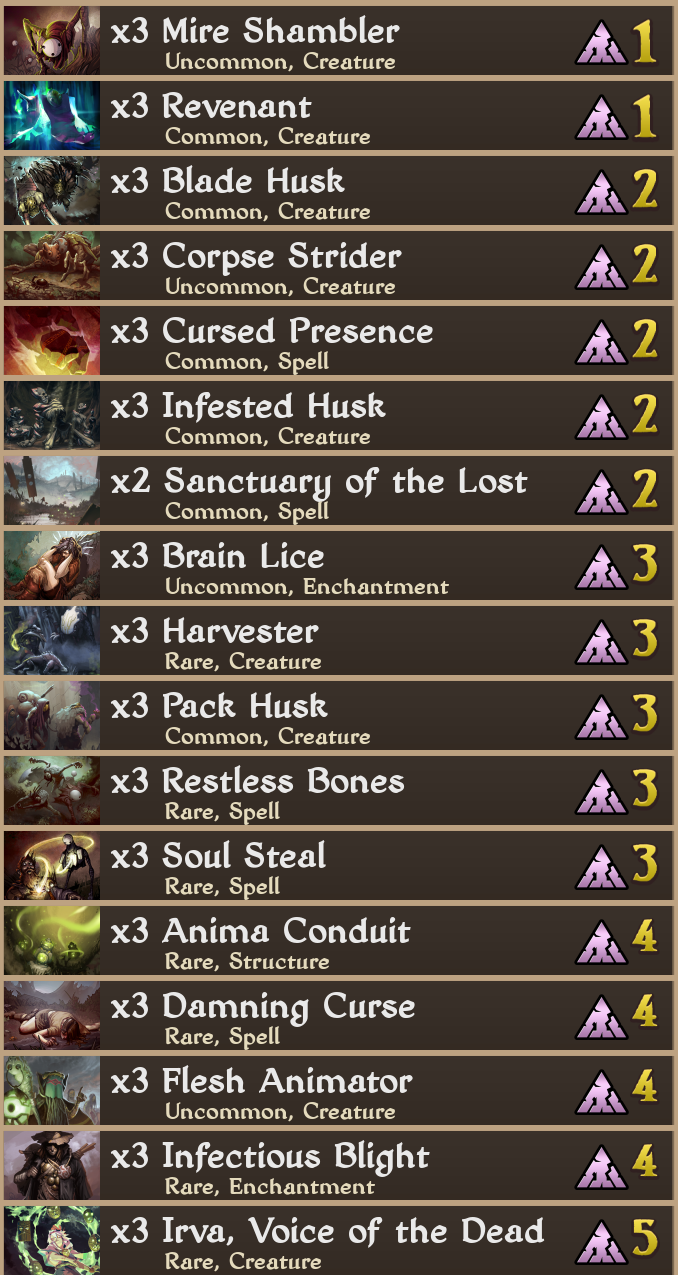 My third deck that I want to talk about in Echoes is Undead Decay. Now a few notes about this deck before I begin talking about it in detail, this deck is not designed for Ranked play. It is designed specifically for Tournament play only (or at least my version is). This is because this deck struggles against any kind of mid-late game decks. If you want to play a fast deck in ranked, you should play Tempo Order or Aggro Growth. This deck has one purpose and that purpose only, to shut down Tempo Order and Aggro Growth and it does a great job at this task.

If you have decks that are better at countering Tempo Order or Aggro Growth then by all means you can play your deck, however I have yet to lose against these decks with this version of Undead Decay. It really does a great job at shutting down early aggro and stealing board control from these fast decks. This deck has a few interesting/weird scrolls, I mainly want to talk about Sanctuary of the Lost, Slayer Vestige, Rot Eater and Infectious Blight.

First of all, I am praising this deck for being so good against early aggro yet I have Sanctuary of the Lost in this deck, what is the deal with that? In tournament play, predicting can be a painful thing. If you predict successfully what your opponent will play, then you can counter that deck and have an enormous advantage right off the bat. In fact, predicting can be so strong that it can allow you to win a match before it even begins. However, if you predict wrong you can dig yourself into a hole which you won't be able to get out of. When playing against Nrp in the Minecon qualifier, I predicted that he'd play Tempo Order for the first game, and Automatons Energy for the second game. He ended up playing Automatons Energy for the first game, and Late Game Decay for the second game. I lost on the predictions against a very tough opponent. Losing predictions against Nrp is something you should never do as he will punish you very hard. This is why playing your strongest deck can be very important because you don't have to be worried about losing the predictions game. Anyway I got off-topic a little, Sanctuary of the Lost is in the deck in the case that you predict your opponent to play a tempo deck but they end up playing a mid-late game control deck. Sanctuary of the Lost allows you a better advantage if this happens and you don't automatically lose against your opponent if you lose the predictions game. However in the case that you know your opponent plays nothing but aggro growth, you can remove this scroll from the deck with confidence but remember, you are doing this at the risk of them switching decks. It's up to you to decide whether you're confident enough not to play this scroll or not.

The next scroll that I wanted to talk about is Slayer Vestige. I tend to play him more often than I play Sanctuary of the Lost so don't be surprised if you can't find him on my deck list. I tend to run 3 of him, with 2 Infectious Blights. So the deck list does change slightly. The reason I chose other scrolls over him is that there are already enough undead 2 cost scrolls in this deck that are better than him so I don't find him compulsary to run. However if you prefer him over other 2 cost undead scrolls then go ahead and swap them. I don't recommend swapping Slayer Vestige and removing removal scrolls such as Cursed Presence as the removal scrolls are quite crucial in this deck.

I also want to talk about Rot Eater and why I don't run them in this deck. He can get very big, very fast especially against tempo/aggro decks. I think running him in this deck can be very beneficial. However, he is not undead and he doesn't have any synnergy with undead other than getting really big really fast which is why I tend to forego running him in this deck. I try to keep this deck more on the control side rather than getting strong creatures side, but idk, you can add him to your decks if you wish to do so.

Final scroll I want to talk about is Infectious Blight. It is always useful to drop it on an important creature in aggro/tempo decks, it especially works well with Cursed Presence for strong creature sniping ability. Plus it's always annoying to deal with. I have a feeling that I value this scroll a bit too much in this deck but that's for you to decide, my choice about it has been made and it worked out in my favour most of the time.

That is it with this deck, I find it really strong and it's been bringing me a lot of goodness in tournament play. Hope you can find this deck just as useful as I did. May the wolf spirit guide you to victory :)