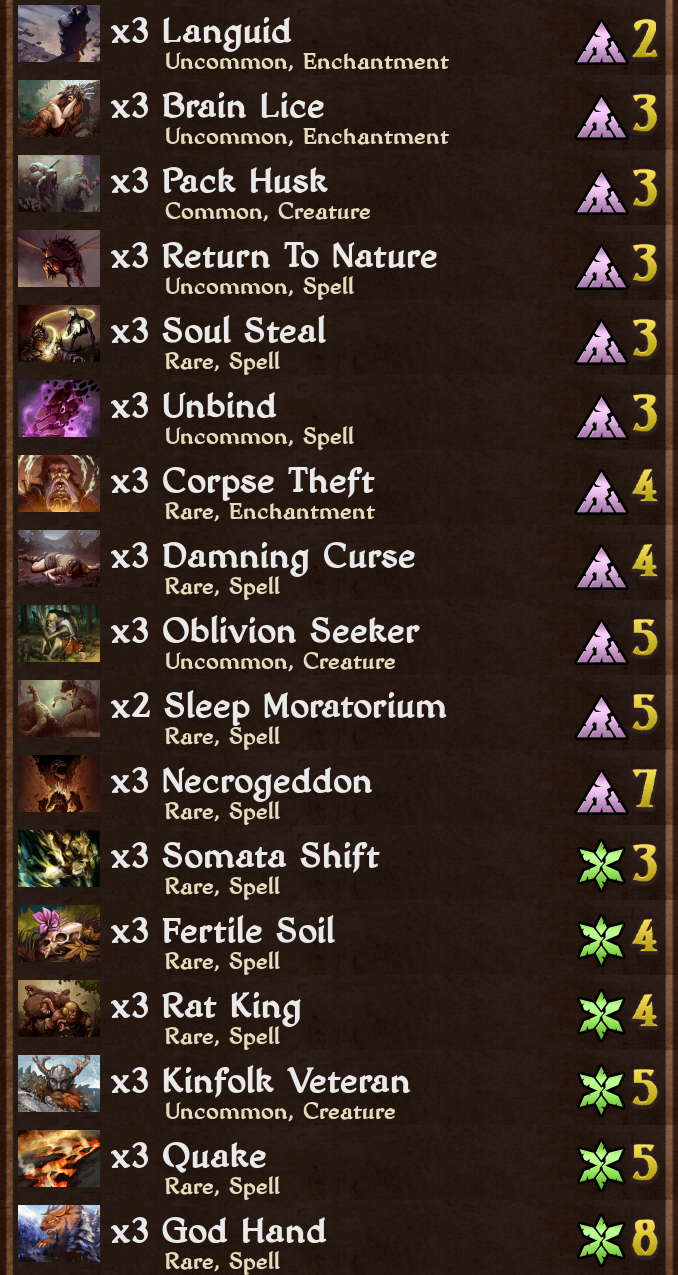 As promised to many people, I am posting all of my decks on Scrolldier now that I am out of the Minecon competition. The first deck I'm going to talk about is my Somata Shift deck which has been doing very well lately especially against Energy Automatons.

Most of the scrolls in this deck are standard in any Somata deck, I mainly want to talk about Pack Husk, Sleep Moratorium, Erode and some other general information.

The Pack Husk does get in the way of Somata Shift making it harder to get the Veteran and less chance of getting Oblivion Seeker who gives more scroll draw when he dies. The reason I am running Pack Husk is because he is a decent 3 cost creature that gives scroll draw, and he is by far the easiest and most beneficial creature to combo with early Fertile Soils. When I get him out of Somata Shift, I am not upset because I don't get an Oblivion Seeker or a Kinfolk Veteran, Pack Husk still acts as a decent wall that gives a scroll on death so I really don't mind as much if I get him out of Somata. Outside of Somata, he also acts as a great 4 health wall which can be crucial in a slow deck like Somata Shift. So the benefits of running him out weigh the costs of playing Somata Shift which is why I really like to have him in this deck.

Sleep Moratorium may seem off in this deck and this was pointed out on the stream when I played against Nrp in Round Four. I only run 2 of this scroll because it's a late game scroll that I don't give much play myself. There were numerous times where I got screwed over by this deck not drawing god hands or necrogeddons late in the game when I need them for the winning combo. I tried running Halls of Oum Lasa instead of Sleep Moratorium but I found it difficult to play as giving 6 resources for Halls is not worth the value in this deck. However with Sleep Moratorium you get your resources back after playing it, and in the worst case you can still get scrolls such as Unbind to finish off some combos you have in your hand and for easy removal. Although Sleep Moratorium is basically useless in the early game, it can become the difference between losing and winning whether it's in board control or the game itself.

Erode is the next scroll I want to talk about. If you look at this deck list, Erode is not on there even though it's a very strong scroll for ramp. The reason I don't have it in the main build is because if your opponent doesn't play structures (such as in Decay decks) you can get really screwed by this scroll. However I can't say I don't run it. In fact when I think my opponent will play an Automaton deck or another deck with structures I add this scroll to my deck and replace Return to Nature with it. Return to Nature is strong, but I notices it doesn't get much play against Automaton decks even though it almost acts like a frost gale. It's the hardest thing in the world for me to give up Return to Nature for Erode, I almost want to run a deck with 53 scrolls but I just do not see any other scroll to give up for Erode. Maybe Sleep Moratorium? I might start running Erode and Return to Nature instead of Sleep Moratorium but I don't know how much this will hurt my late gameplay. I still need to play around with which of these scrolls I want to remove. As it is now, the choice usually falls between Erode and Raturn to Nature.

Other scrolls are fairly standard, I run both Damning Curse and Unbind for more removal, Corpse Theft also makes for a nice addition to this deck. In tournaments, I've been doing alright with this deck with the only serious loss to Nrp as his Decay Tempo was too fast for this deck to keep up with. However it's not to say that I didn't have any control either, in fact I was doing very well in controlling the creatures that attacked but the problem was that scrolls such as Necrogeddon and God Hand can be tough for this deck to play against as those decks tend to do better overall. Had Nrp played Automatons again this deck, I think I would have done better.

I have not tested this deck in Ranked yet, however it's been doing very well in Quick Matches against other players. I feel that this deck has a lot of potential in the current meta and I am sure other players might be better at playing this type of deck than I am. If you do play this deck, I wish you best of luck with it, it can get pretty scary if your opponent lets it to. And it does very well against slower decks such as Automatons as I said previously. May the wolf spirit guide you to victory :)