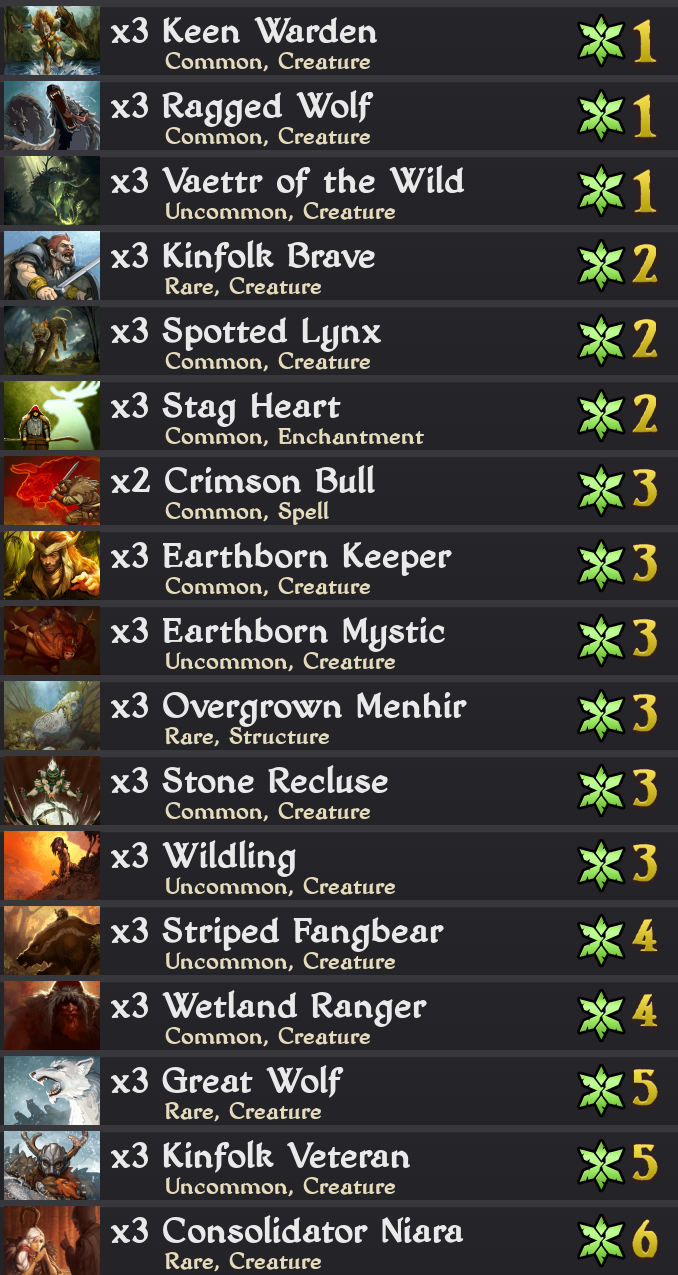 My version of Gaggro for the latest set. It focuses heavily on 1CD units and creating a constant board pressure.
This might work a bit differently to many other aggro growth decks. I'm not sure if this is the absolute best way to play, but I prefer it over most other versions.

Most of the units in the deck are pretty basic for aggro decks, but there are a few differences to how you use them.

Kinfolk Brave: You know how he works. Next creature

Earthborn Keeper: Interesting and sometimes undervalued creature. You can get cool combos by playing him with Rat King, but I don't think that is needed to make him useful. 1CD alone is a good enough stat to include him since you can get him up to 2 attack on most turns and even more with enchantments.

Wildling: Same as Keeper, she is usually played as a combo with ratkings or enchantment stacking. I usually think of her as an extra Brave, only play 2 creatures next to her until you can find some enchantments.

Wetland Ranger: Same as Brave, everyone loves this guy and knows how he works.

You might notice there is no direct countdown decrease spells in the deck. That is because I feel they are not really needed if you include enough 1CD creatures that don't even need to be Rallied.
For the big attack bursts I often use haste. Ragged and Veteran are your usual tools for that but this deck has an extra trick.

Overgrowth Menhir: This structure can be insanely strong and wins you games easily if the opponent can't destroy it. And it gets destroyed surprisingly rarely as you also have a lot of creatures on the board creating a more immediate threat.
What this structure does is turn all your 1CD creatures into hasted creatures. But don't forget to play all other creatures next to it too since they get reduced to 1CD and attack the next turn. The ultimate play is to have 2 Menhirs out so you can haste even 2CD creatures, but that rarely happens.

The best time to play this is either on turn 3 if the opponent has not really got much of a board yet and you have braves or other 1cd creatures in hand. If that isn't safe try to save it until you get 5-6 resources and play it as a combo with your 1cd guys.

I like placing Menhir on the middle tile of either edge. It's not really worth messing up your positioning by putting it on the middle, and you can always move your creature after getting the CD reduction, making only the opposite edge completely safe for the opponent. It might sometimes be worth playing Menhir on the middle, but mostly if you get it out on turn 3 and have 1CD creatures in hand to haste and kill the first creature the opponent tries to play.

Next we have the damage buffs:

Crimson Bull: Only 2 of these in since they are a bit expensive and Niara can provide more cost effective buffs. Still worth playing though as you want to get those buffed ragged wolves out.

Stag Heart: The only enchantment I run. This is the most cost effective and versatile enchantment in growth and I prefer it over any pure damage buff. Use it both to buff the health of weaker 1cd creatures and to get extra damage when you need it. Don't stack everything on 1 creature as that can be dealt with very easily now. It's also helpful to keep 1-2 Stag Hearts in play and 1 in hand for surprise damage buffs or haste combos.

Consolidator Niara: The new best card in growth. She can win games on her own, and 6 cost is just low enough to make it even into aggro decks. The trick for playing Niara is to control what subtypes you have on the field. If you have her out try to kill off any weak creatures that share a subtype with something in your hand, so you can get the buff from playing them again. A good example are Vaetters and ragged wolves. They are both fairly useless to you on the board at the stage you have niara out, but the damage buff can be gamechanging.

The deck has 8 different subtypes, Warden, Wolf, Vaettr, Kinfolk, Cat, Mystic, Bear and Rebel. Keeprer and Wildling are the 2 odd cards with no subtypes for Niara, but since they are the cards that most benefit from the buffs that doesnt' really matter.

The rest of the cards are pretty self explanatory and anyone who has ever played growth should know how to play them. Just pay some attention to subtypes.