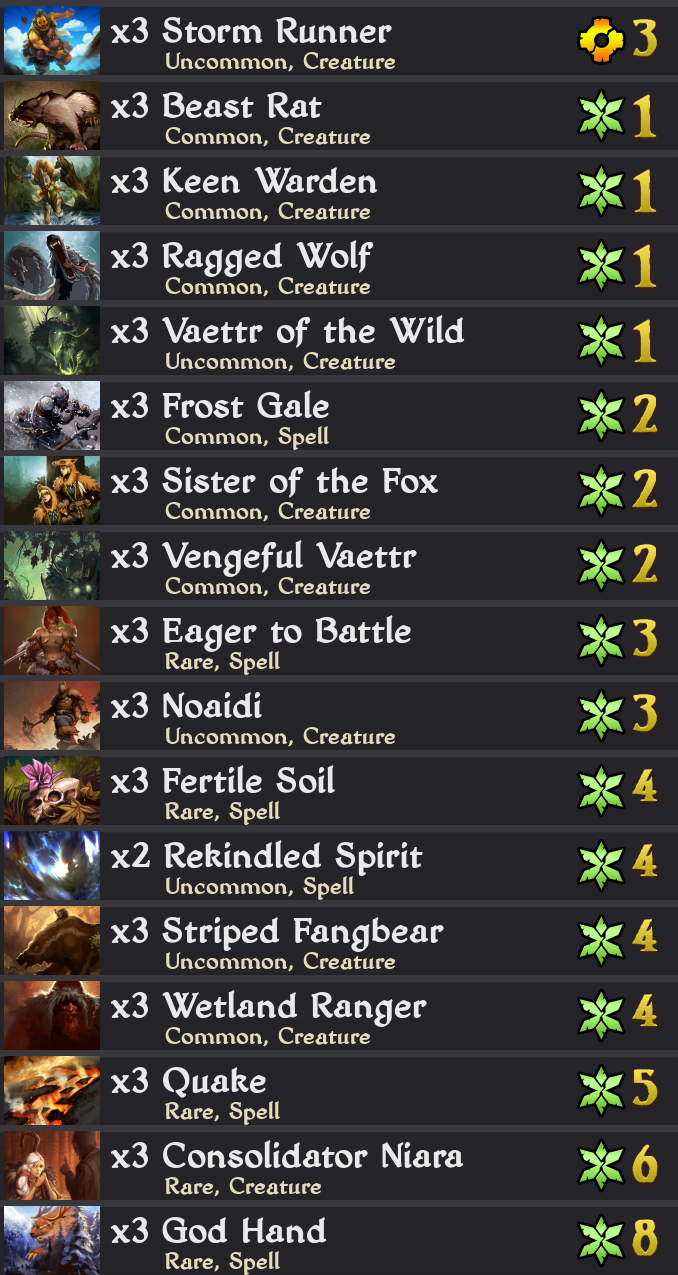 Force of Nature - Niara Growth
Score: 2 - by Demmiremmi - 5 years ago

After dropping in rating from 1800 to 1600, playing some weird decks, I built this deck to climb the ladder again and I'm sitting at ~1700 Rating with it now. I think it's very enjoyable and fun to play, though while having the potential to beat any of the top meta decks, it's not as consistent due to it's heavy combo-based playstyle. With the incoming Nerf to Niara, it will be still fun to play, though significantly weaker. I would recommend everyone to give it a try before the Niara Nerf. I'm sure this is not the absolutely best version of this deck, and I hope some better players might be able to improve it.

1  Beast Rat:   rat-subtype + 1 cost makes this card actually good in this deck. Play it with Niara and Eager to Battle or sacrifice it for Fertile Soil.

1  Ragged Wolf: same purpose, but can also be played at 7  with Niara and without EtB or can be used to finish off units after Quake/Frostgale.

1  Keen Warden: same purpose, it can be worth playing him on turn 1 to create a bit of pressure and can then be sacrificed for Soil/Spirit.

1  Vaettr of the Wild: same purpose, can be worth playing on turn 1 to get a faster start.

Those four little ones quickly grow very large with Niara. As you are building up towards your big combo plays at 7  or higher, you want to keep one of each if possible. Theoretically it is possible to destroy 3 full health idols at 10 , if you have play EtB previously, by playing Niara and then one of each.

2  Sister of the Fox: Just a very solid card all around in this deck. Draw + Kinfolk-Subtype + best Fertile Soil Target.

2  Vengeful Vaettr: Another solid card. Can be played at 5 with EtB, putting you at 6  , which allows you to play Niara + One-Drop next turn.

2  Frost Gale: I don't think this needs much explanation. Can sometimes be used to kill your own units, so that you can play a certain subtype again.

3  Noaidi: Great just to get another creature on the field with Niara and EtB. Allows you to make the above mentioned One Turn Kill at 9 .

3  Eager to Battle: Core card of this deck alongside Niara. All units you play get the haste effect. More explanation on this later.

4  Fertile Soil: If you can get a soil off on turn 4, always go for it. Can also be used to clear your board of a certain subtype you want to play again.

4  Rekindled Spirit: Save one of these if you know your opponent plays some important linger spells, otherwise just use as a weaker Fertile Soil.

5  Quake: You rely on this to clear the board, as your opponent will usually have board control early on.

8  God Hand: This will win the game for you. Play it after your Niara Combo at 7  or higher. You can even just drop all your little ones and GH.

3  Storm Runner: It's very gimicky, but noone ever expects the 4 or 6 Attack hasted Storm Runner.

How to play this weird deck:

Early Game: Niara and Eager to Battle are the 2 Core cards of this deck. Your early game objective is to ramp up, while getting as little idol dmg as possible. With this in mind, try to get a starting hand with either Niara and/or EtB and Fertile Soil or Rekindled Spirit.

1 : Play Vaettr of the Wild or Keen Warden.

3 : Play another sister or nothing

Mid Game: Your mid game objective is to keep ramping up and slowly regain board control, by clearing the board with quake/frost gale and/or playing your first Niara Combo.

5 : Play Eager to Battle into Vengeful Vaettr. Play Quake if your opponent has a good number of units on the field. Play another Soil/Spirit.

6 : Play Fangbear/Ranger/Vengeful Vaettr if you have EtB active. Play Frost Gales/Ragged Wolfs to clear board. Play EtB to set up next turn.

7 : Play your second Quake. Play Niara + Ragged Wolf if you don't have EtB. Play Niara + any one drop if EtB is active. Play EtB + Bear or Ranger.

8 : Play More units, if you have Niara + EtB active. Play God Hand. Play Soil/Spirit again if you are running low on cards.

Late Game: Your objective is to finish the game by either keeping board control and playing units each turn or saving cards for one final combo.

12 : Play Eager to Battle + Niara + Noaidi + 3 one drops/Storm Runner. You should have won the game by now.

I hope I could give you a general idea of how to play this deck. You can obviously always sac for cards if you feel the need, though ideally you want to sac for resources every turn and get your cards via Soil/Spirit. This is the first deck I ever published on scrolldier, so feel free to give me honest feedback and ask questions. I hope you enjoy my deck. :)