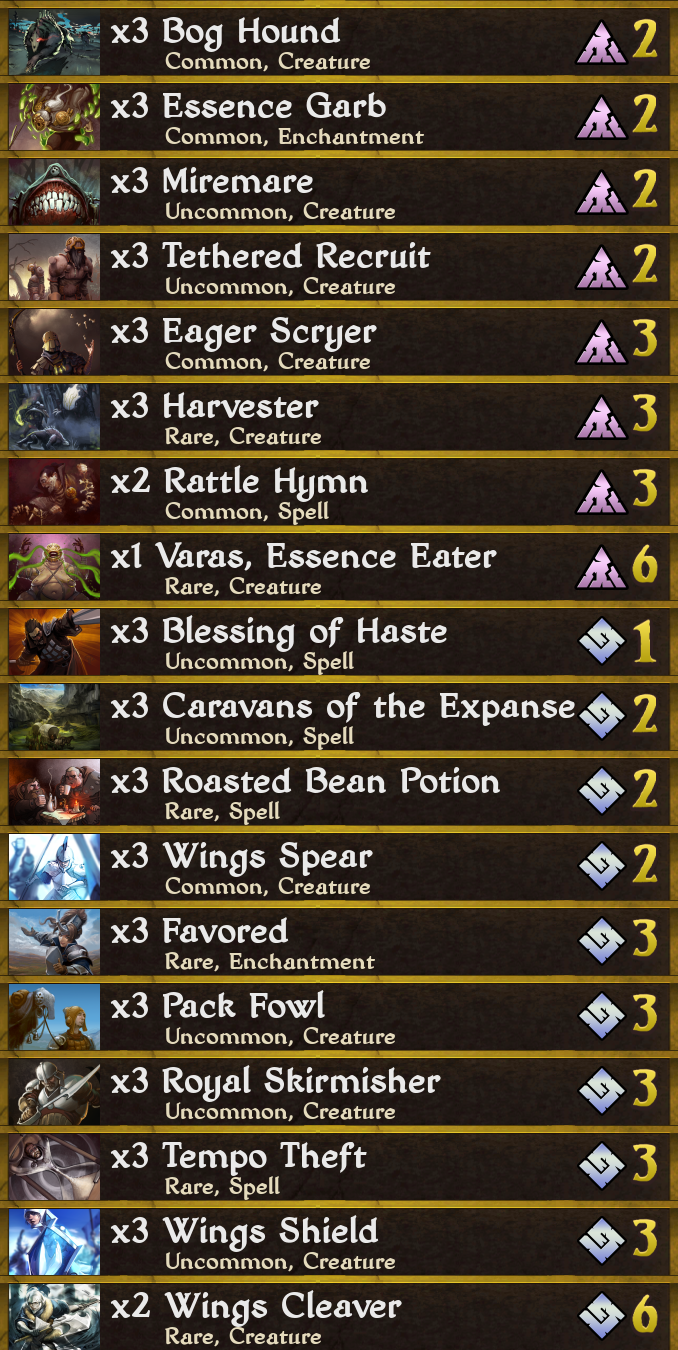 When you start building a deck typing "t: dominion" in Deck Builder you know that it isn't going to end well. That's how this child of mine was born and, as every newbie father, I had my money ( aka rating) drained down because of him. With such a prologue I wonder if people will actually read this guide...

3x Blessing of Haste 1 : This deck needs CDR spells because they let you end your agony quickly.

3x Caravans of Expanse 2 : The core spell of the deck, you need to play it as soon as possible to benefit from the incredible power spike this card gives you, which is the only strong spot of this deck so... well, play it. If you manage to take down an idol with a single Linger cycle congrats, you may win the match. Thanks to the recent buff Caravans provides a small global attack buff to all your units when Dominion triggers which is at least not totally useless.

3x Wings Spear 2 : She's basically useless against Energy, she can be Soul Steal'd (Soul Stolen?) but at least she is quite good against Growth and Order.

3x Favored 3 : Awesome enchantment: +5 Atk and +2 HP with Caravans will allow you to scare your opponent to death until he realises he will probably win anyway by playing anti-enchants, anti-lingers or hard removals.

3x Pack Fowl 3 : It’s fairly good stats-wise, it provides a good ramp advantage with Dominion and it improves your splashiness (is it even a word?). Put it on the backline since you really need to keep it alive as longer as possible. Pack Fowl’s Dominion effect increases total wild, not current wild so you’ll get extra wild the turn after the effect triggers.

3x Tempo Theft 3 : The Harvester-Tempo Theft combo is basically the bread and butter of all DO decks. If you manage to pull out Caravans and Pack Fowl in early game you can set up this combo even on Turn 5.

3x Vigor Extraction 3 : It isn’t as good in this deck as in DO Control decks, but it still does its job.

3x Wings Shield 3 : She protects your core units (Pack Fowl, Harvester, Wings Cleaver and Eager Scryer) and she keeps a good board control.

2x Wings Cleaver 6 : Despite her high cost, she works well with Dominion enchantments and doesn’t rely on Tempo Theft like Harvester. If you manage to keep her alive for a turn, you should be able to play BoH/RBP and Essence Garb/Favored the following turn.

3x Bog Hound 2 : With its 5 Atk it can get rid of Wings Shield and meat walls and it also can be used to rush idols. It’s worse than Miremare with Caravans but better without it (I guess you would have never figured out it, amirite?)

3x Essence Garb 2 : Don’t play this enchantment if Dominion isn’t active; keep it for flashy plays the turn you play Caravans. With +3 Atk and +3 HP it’s almost as good as Favored but for a cheaper cost.

3x Eager Scryer 3 : He can be used as an offensive creature with Favored/Essence Garb or as a utility one by switching his CD with Harvester by playing Tempo Theft.

3x Harvester 3 : Pull it out when you have Tempo Theft in hand and enchant it with Essence Garb if you are able to. If it survives for a second attack, you can stack up multiple enchantments to clear any row.

2x Rattle Hymn 3 : Arguably the best anti-linger in the game, play it to shut down your opponent lingers and draw Caravans. You may need to use it only to draw Caravans though.

1x Varas, Essence Eater 6 : Similar to Wings Cleaver, but Varas becomes really strong when you start getting outscaled, so he should help you to take down the third idol before it's too late.

Why should I play this deck?

You shouldn’t, but, if you manage to reach Exalted Caller with this deck, you should start playing viable decks because you may be the best player Scrolls has ever seen (I'm dead serious, how do you even reach Master Caller with a deck with such a resource curve?). According to my recent experiences, this deck is quite good in BO3/BO5 series due to its nature as a "surprise" pick. Must be played only once per serie because your opponent would surely play around it at the second time.

How do I play this deck?

There are no proper ways to play this deck, you just need:

- A body that is able to tolerate high amounts of NaCl