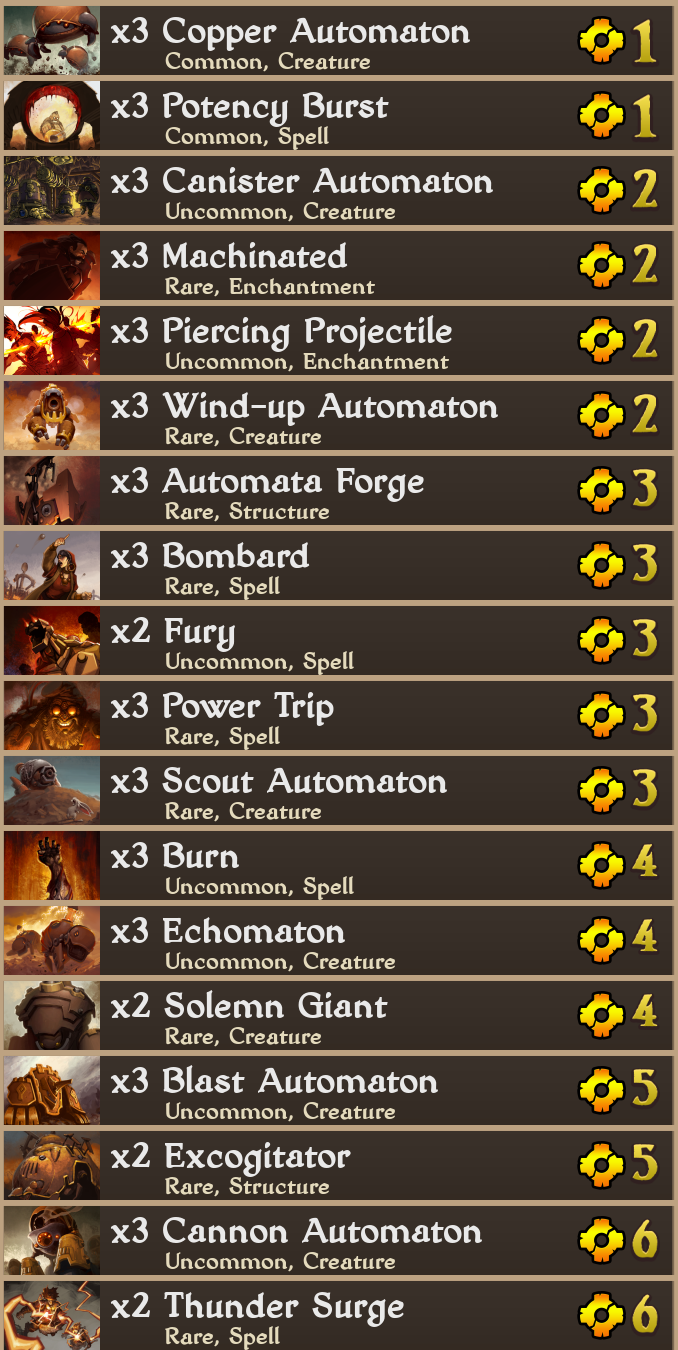 Going Manual-Winding Up Some Madness (Echoes Automatons)
Score: 1 - by alvarpq - 6 years ago

This is my automatons deck that I've been playing lately. It's a bit mid-lategamey, but it seems to be doing fairly well against most, if not all other decks.

Just like I do with Irva Gives Directions, I'm going to go over every card in the deck and explain its value, and why I have it, as well as go over other scrolls that you might consider including. I'm not an energy expert or anything, so this deck is built more on intuition and impressions rather than experience, but hey, it's worked for me so far.

THINGS THAT ARE IN THE DECK:

Copper Automaton: this guy isn't run as a turn 1 play, but with Fury, it's some nice removal. It's also great for stalling and making threats.

Potency Burst: Versatile as all hell. Really great in early game for getting rid of pressure, as well as killing stuff later.

Canister Automaton: Decent against growth, and the same stats (other than ranged) as copper. Seems pretty good to me.

Machinated: Burst damage, but it's abosolutely insane on Wind-Up. Great for finishing idols off too.

Wind-Up Automaton: It's a great offensive scroll, that becomes extremely relevant in the late game, and with a few scouts out, is pretty brutal.

Automata Forge: A unit factory seems important, and with the scouts and excogitator, the gun autos become pretty good too.

Bombard: Originally, I was running Dance Battle here, but since Fury works pretty well for that anyways, but since most stuff is ranged anyways, and Power Trip lets you make big plays with it, this feels like a better fit.

Fury: Standard CDR for 3, but timed with a  Copper, or just a decent board, it's extremely strong.

Power Trip: one of the key comeback scrolls in the deck; it's huge for making a few big plays if you lose the board.

Scout Automaton: Seems like a no-brainer in an Automaton deck.

Echomaton: Good for scaling up to the late-game, and it gets HUGE against some decks.

Solenm Giant: The finisher in this deck, you'll typically power trip up to him to take out an importannt unit or snipe an idol. It's a big part of the deck's late-game.

Blast Automaton: Great against growth, with the armor and blast strike effect.

Excogitator: Another no-brainer for an Automaton deck.

Cannon Automaton: Good blocker, and it's strong in every matchup. Also, it feels like a great 3-drop with Power Trip.

Thunder Surge: People have gotten lazy about playing around this. Maybe later, Sudden Eruption will be better, but for now, THIS is how we beat growth.

Gun Automaton: Seems like a decent 2-drop, but was the weakest of my 3 choices, and so it was dropped for the sake of the curve.

Replication: Typically I spend all of my energy, and so a 3/2/2 for 3 with some synergistic elements didn't seem worth running when I can run Forge and Scout instead.

Stone Enigma: If there's a lot of lingering, this goes in. That is all.

Violent Dispersal/Spark: Potency Burst has taken these spots, and so I can run more stuff.

Hired Smuggler: Probably one of the best 2-drops, but there are enough already, and Smuggler's a human, not an Automaton.

Dance Battle: I don't really want to run this, as it feels like a slightly better Fury that costs 1 E more.

Top Reaver Thea: Might seem out of place in an Automatons deck, but works surprisingly well here; this deck always wants more resources to pump stuff, and Thea gives it. Aso, 7 piercing attack is nice too.

HOW TO PILOT THIS DECK:

I don't really feel like typing anymore, I'll fill this part up later. My wrists hurt, and I'm hungry.