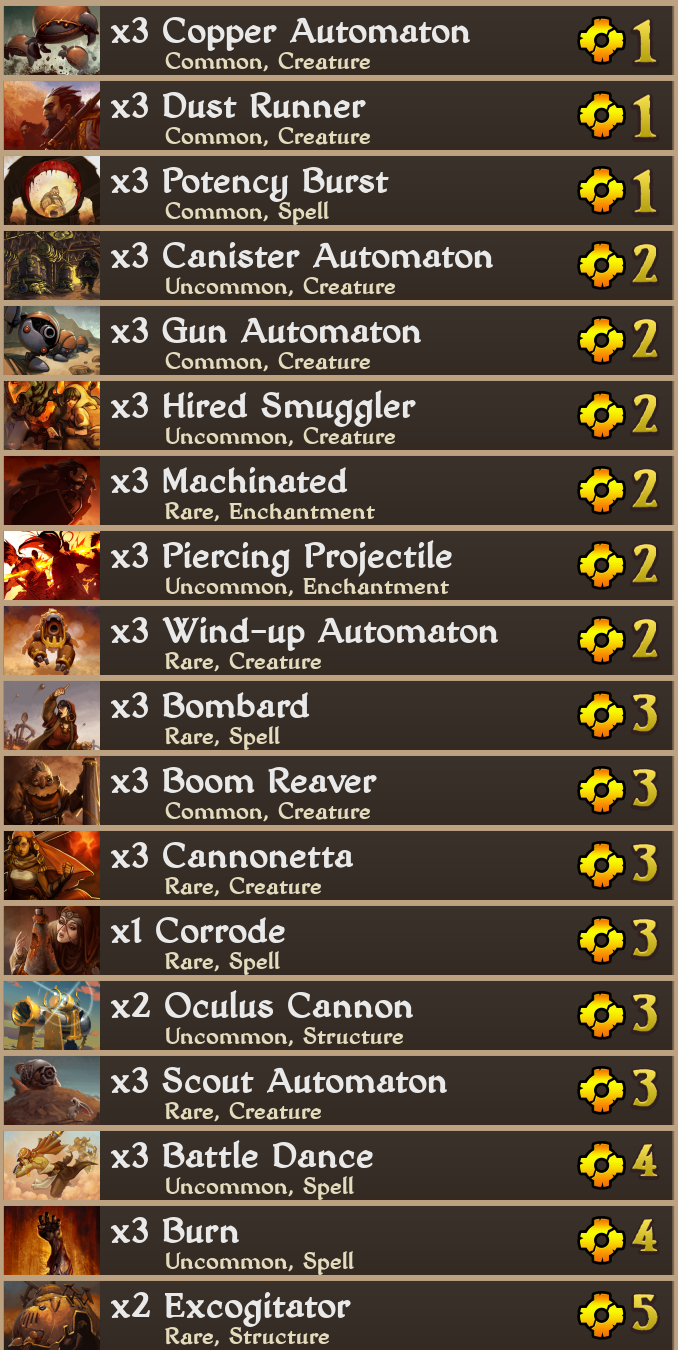 Based this Echoes build off my previous Aggro Energy deck.

New star of the deck is Wind-up Automaton which is crazy good at applying pressure. I am still contemplating if Cannister Automaton has a place in the deck but the meta post Echoes is looking very Ranged-heavy at the moment so I'm leaving him out for now. Would like to work in 3-5 more creatures into the deck if I can figure it out, draws still look a bit iffy and I'm not sure all that countdown reduction is needed with Wind-up Automaton in the deck.

Battle Dance is a straight upgrade to Fury most of the time and might be one of the most powerful Echoes scrolls in general. It's obviously very good with Copper Automaton especially!

EDIT: Since Excogitator is so ridiculous, I've added a second one and removed the Useless Contraptions to free up Smuggler draws. I've gone up to 3 Cannisters to compensate for the lack of Contraption blockers.

Wind -up is bonkers, especially with Machinated or Projectile. Excog dug me out of tight spots (after board clears like Quake for instance) and allowed the deck to ramp to 9-10 resources frequently while still applying pressure. Was 1 damage off a glory Corrode vs Holofoil, might keep the 1 copy in to allow for comeback wins (like Copper +  Copper + Battle Dance + Corrode).

Potency Burst was an allstar, killing everything from Oculus, Thea, Cannon Auto, Urhald, Storm Runner etc while still allowing a 2nd drop for the turn most of the time.

No changes to the deck yet, felt extremely solid. However, most sacced scroll so far might be the newly nerfed Battle Dance oddly enough, at four cost it feels much less powerful than when it was at three Energy so far and it doesn't fit the curve that well anymore.

Didn't have a chance to play a ton during Echoes launch week but I am 15-1 so far in Ranked with the deck. Only loss was to DO Timelords (Harvester + Tempo Theft) in a long drawn out game.

Corrode has been performing excellently so far, sniping wins here and there. It feels needed in the slower control matchups where I can play it on one of the few turns where I get to keep my units to either close the game or bring the idols down so low that I can finish the last idols with Piercing.

Still no changes to the deck, it performs just like I want it too and ramps surprisingly well with Excogitator and Wind-up Automaton. Feels a bit unfair to play aggro with a long game plan... ;)

I am now 26-2 with the deck in Ranked. It feels very powerful to play and can switch gear between aggro / lategame (Smugglers and Excog) and board control / finish. Good comeback potential with Piercing and Bombard. Good sniping with Bombard, Battle Dance and Corrode. Still no changes.

* Mulligan if you don't get a two-drop.

* Try to prioritize adding creatures to the board over using spells to clear your opponents unless you already have a good board position.

* Getting your opponent down to a single idol with 1-2 hp is often worth it in lategame matchups, you can then go for a hand with Oculus/Bombard or Cannonetta/Machinated/Bombard.

* It is often worth zoning with Copper Automatons (placing one in row 2/4 and your attacking units on the other row) early to prevent your opponent dropping creatures, you can sometimes get whole turns or free damage like this.

* Unless the board state dictates otherwise, the best place for an Excog is top row, middle. This allows it to be protected and also spawn a Scout so you get the buff before your Automatons in row 2 and 3 attack.