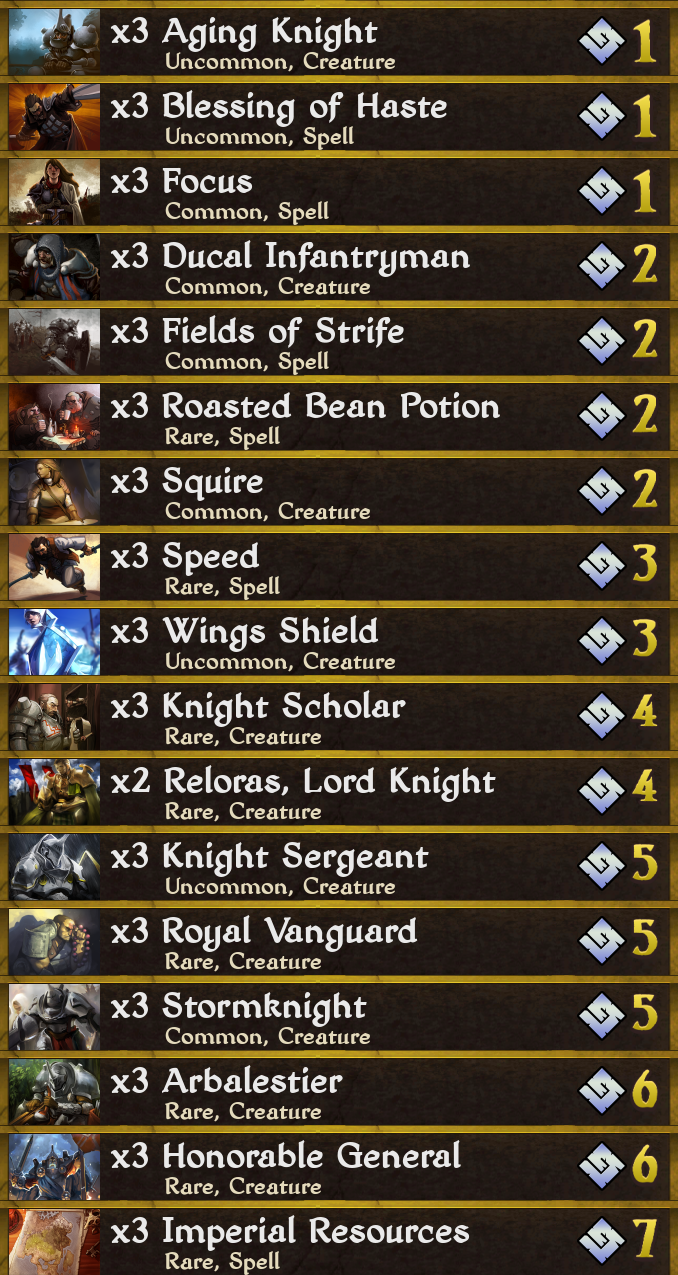 A knight heavy deck ive been playing around lately. It has performed rather well.

The concept is you start off to try get a fair starting curve, such as a turn 2 squire and turn 3 wing shield. But honestly i do not mind dropping for example a ducal infantry on turn 3, as long as i am creating chumpblockers for my coming knights so am i good.

When you reach 4-6 resource you can start to drop knights, you should always rush to at least 5. Then every turn try to always drop a beefy knight. This makes it difficult for the opponent to take them out in time, and you slowly win the board presence and ultimately the game.

If you start to reach late game you can use imperials to not fall off to much and keep the preassure.

The deck works a bit differently then some other common decks in that you are very heavy on knights and therefore the best damage burst honestly comes from focus or field of strife, both vanguard and reloras are good but not that reliable. The units you should try prio getting out is sergeants and general, their countdown synergy creates the threat of pressure that you want to force on your opponent.

There is no tempo thefts in the deck so Arby is honestly not that important to keep, if you can get them out then yes of course they will start to do work, but i have found the generals in this deck to be better, especially if you can drop a sergeant on turn 5 and a general on turn 6, then on turn 7 all knights will attack except for general who be at 1 countdown, making everything attack the turn after, this creates massive preassure.

The Arbies are good to put out if you got speed in hand for next turn or got either general or sergeants out to help him countdown faster.

The stormknight may raise a questionmark, it is a pretty good unit in this deck for all the knight synergy, i do not always play it, but it can be a great tool to close the gap if you have build a force somewhere on one side of the field and now want to try move up but wish to strike the opponent first. He is also generally good as a win more card, as he deny any reinforcement the opponent try to put out if you got control of the board.

The negative thing in this deck you should be aware of is that it got very low comeback streangh, if opponent find a way to deny the knights you put out, like 2 buffed kinfolk braves, or manage to remove all your forces like storm runner with machinate, so will you probebly lose unless you reached a imperial stage. If you reach imperial stage there is some stuff you can try do, like arby speed focus, but if you still on 6 resource then you likely wont be able to put out enough amount of units as they keep removing.