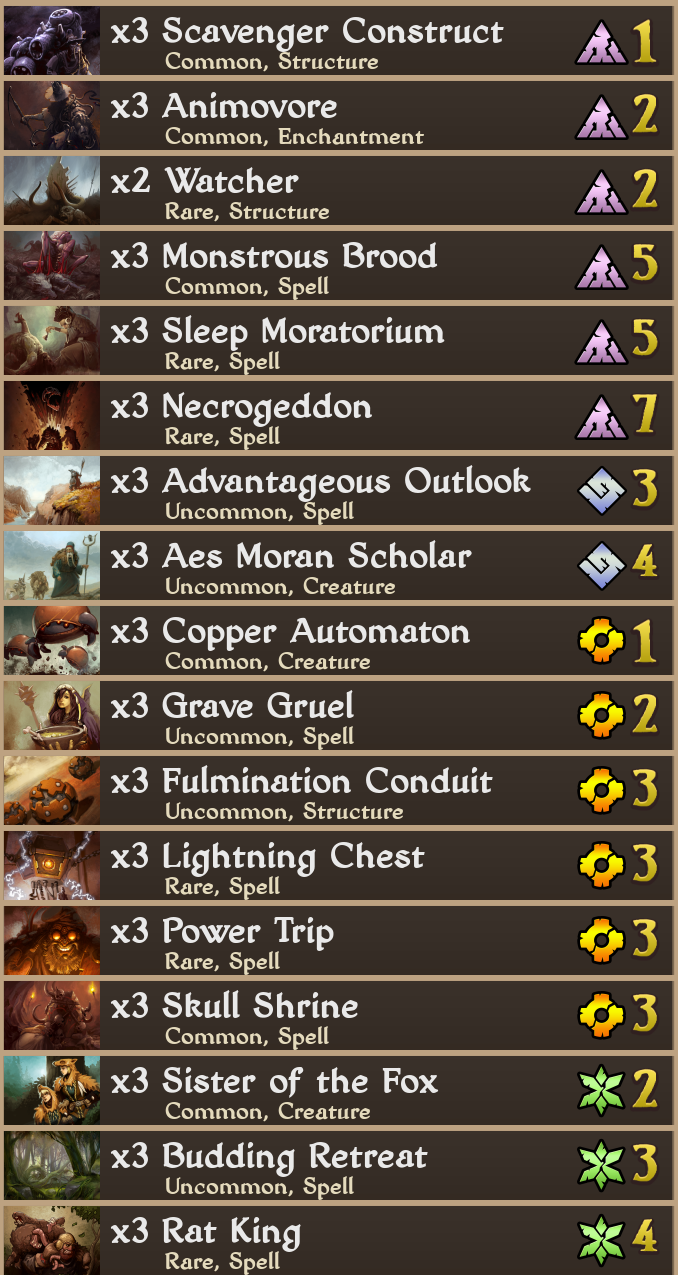 Some images of a game with this deck: http://imgur.com/a/LCF1x

The full name of this deck would be something like ramp energy draw scavamore pudding. That's a pretty long name so I decided to go with this as it makes use of lightning chest a lot, and because it is really cheesy. And mostly because it sounds fun. I came up with this a while ago, but always thought it was just a crazy thought that would never work. Yesterday I saw Blinky play a similar deck (props to Blinky for being awesome), and so I decided to actually try it.

How you play it: idealy what you want to do is play fulmunation conduits first. Then you play skull shrine, followed by a lighning chest next turn. With this you will be able to build up to 20+ resources fairly easy, power trip's there to help you as well. After that you wait until you have most things you need for the combo. In the meanwhile you have copper auto's a cheap creatures to block your conduits, and maybe kill some enemy units. You could consider switching it for a useless contraption as that one is a better blocker, and your conduits aren't gonna move anyway.

The combo starts with grave gruel. After that you will have a LOT of wild. You want to start by playing budding retreat, after which you start casting draw spells and creatures until you have everything you need. Aes is really good for this, because you can pick which scroll you want, and he will also be a body for necro. Fox sis is also good as a body, as she helps you draw more cards and cycle your deck, and she only costs 1 with budding anyway. I even have advantagous outlook in there for more sift. Scout isn't that great, as you need the cards this turn, not next turn. Also keep in mind that sleep mortarium into another sleep mortarium is a thing.

The big combo itself consists of scavenger construct + animovore with some units (rat king) around it and a necrogeddon or monstrous brood. With budding retreat you should gain resources, and with (double) animovoro you should get scrolls. After that you can play some more units and play another necro/brood. At this point you almost have your full deck in hand, and you can play a watcher. Then you just keep necrogeddoning, one after another: the more the merrier. Keep in mind that you can cast necro's in advance, the cast button appears already. Same goes for monstrous brood, the tiles are already highlighted, even if there hasn't even spawned a monster. Shortly all your opponents idols should be down.

My thoughts on this deck. I'll quote DaOvalord: 'This deck is toxic.' On the other hand, it takes a lot of skill to play. In the beginning you need to decide when to start ramping. Lightning chest has a limited duration, and there's no point in having a lot of resources when you can't do anything with them. After that the real challenge begins. The combo I described above is pretty big, and has to be executed in 1 turn, because your wild only lasts 1 turn. I have counted the amount of scrolls I've played in these big turns, and the lowest amount is 16. 16! And that is the lowest, it quite easily gets up to 25+ vs AI when I have the time. And that isn't just playing scrolls, choosing sifts, moving units, making decissions. It is also finding scrolls. In my match against DaOvaLord in the last round all I played was (I had my full deck in hand/on the field) power trip, power trip, grave gruel, watcher, ratking, necrogeddon. Guess how many seconds I had left when I finally found my necrogeddon. 1. 1 second. Don't get me wrong, this deck is as toxic as it can get (which is half the fun :) but it is extremely hard to pull off in multiplayer (which is the other half of the fun hehe). And it completely dies when your opponent runs lingering removal, which every sane person will do, so it will be close to immposible to play (sadly IMO).

Some ideas on possible changes:

Run only 1 watcher (I run 2 solely because it makes it easier to find one in my big pile of cards when I only have 4 seconds on average per card I need to play).

Run summons to help you get scavenger constructs and conduits.

Fertile soil in for more draw.

Clock library in for more early draw. Problem is that it will likely just get destroyed, wheras you can sac conduits if you know they will be killed in advance when you have lightning chest out.