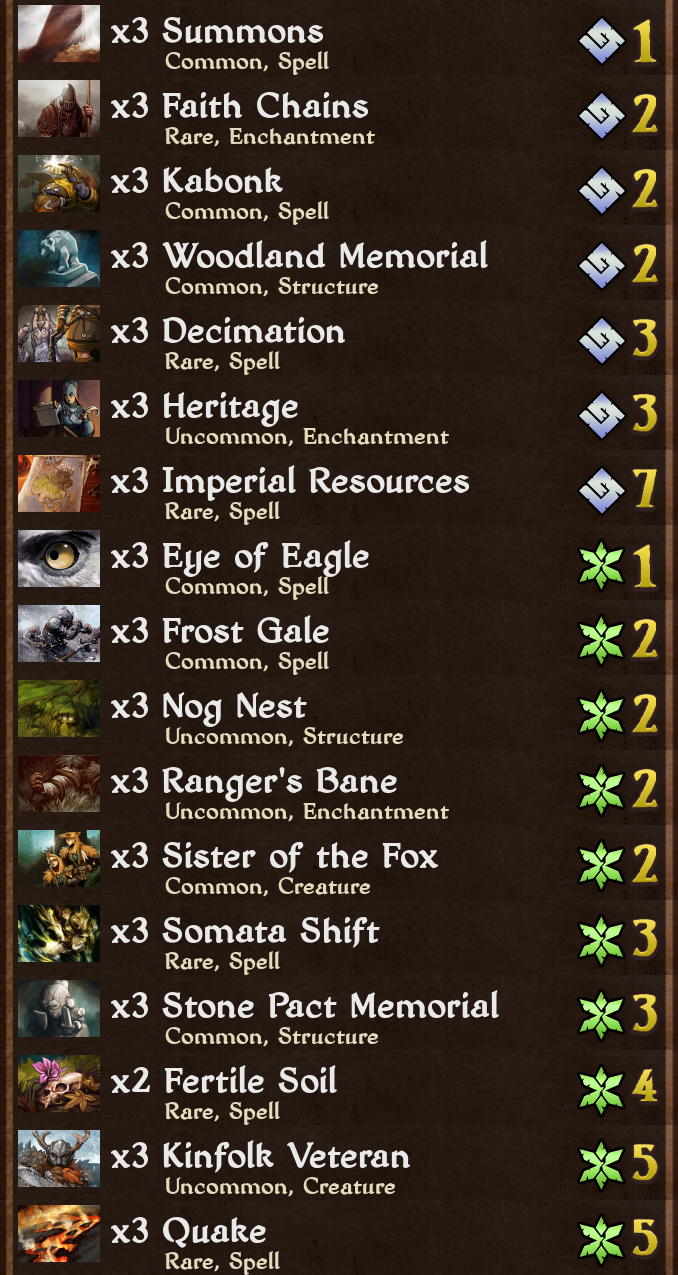 If you ever wanted to play more than 10 scrolls per round, then this is the right deck for you !

-the early game (most likely the first 5 turns) might be a bit weak, but there should be enough global damage to make up for that

-this deck relies a lot on magic damage to clear its way through the enemies units, so if your opponent manages to put some magic resistance on the field this might lead to a huge problem

-killing off the enemies idols without attacking is so much fun :)

-most of the cards in this deck are quite cheap, so you might be able to purchase all the scrolls needed with few effort

You need to finnish off an idol, or need that 1 more damage to kill that annoying enemy unit ? then decimation solves this for you in no time. see it as an expensive frost gale with idol damage to make up for the higher resource cost

Since there are only 2 different types of creatures in this deck (Sister of the Fox and Kinfolk Veteran), this scroll is a save draw for one of those, so, once you play it, you either get a unit with a card draw, that lets you draw further into your deck, or you get a hasted unit, which acts like a surprising removal most of the time you play it.

Furthermore Eye of the Eagle triggers your Woodland Memorials, and lets you draw further into the deck.

This scroll is one of your killing options in this deck. One of them means 5 idol damage, which is huge. Play it on either a Sister of the Fox, or a Kinfolk Veteran.

A perfect card draw engine. But since there is only a few creatures in this deck, and you already have lots of card draw 2 of them in your deck should be fairly enough. This is also a great tool to get rid of one of your creatures, which is enchanted with Faith Chains or Heritage.

You will need this scroll a lot to finnish off everything your opponent puts on the board, so this is one of the key-cards of this deck, and pretty much needed anytime.

This card is a great card draw engine and has some amazing synergies with several cards of your deck. You can play it on creatures which you want to sacrifice, or which are about to die, play it on a nog nest, because a nog nest will be destroyed anyways, or, and this is my favoured combo, play it on a Woodland Momorial to trigger it and draw 2 cards immediately.

Amazing card draw, bonus resources and a heal for your damaged idols, and all of that in one card. So a great card overall and your favoured late game draw engine.

There will always be that moment, when you need that 1 more damage to finnish off something annoying, or you will want to weaken a unit with a lot of HP. Since Kabonk lets you draw a card when you play it, you don't lose anything by playing it. It is very cheap and a great card for the early game.

The most important creature in this deck. You play Somata shift, so you want something amazing in your deck. A turn 3 Veteran can win you early game trades, clear off annoying enemy units and be a nuisance for your opponent at any stage of a match. A Kinfolk Veteran can also weaken enemy units with lots of health, so they get into range for your Frost Gale, Kabonk, Decimation, Quake, or into range for your Ranger's Bane.

A mandatory scroll for the early game. Getting those 2 Nogs out of it is a huge advantage, especially in the early game, so although this deck might be a bit weak in the early stages of a match, the Nog Nest is one of the scrolls that can make your deck shine there.
It is also a great target for a Heritage, and is able to survive a Quake at full life.

This is your heavy mass removal at pretty much every stage of the game. Keep in mind to NEVER sacrifice one, because you will need every single one of those to keep you alive!

Sadly there is no such thing as a Brain Lice, neither in Growth, nor in Order, so you will have to go with this one. Despite having no card draw when the enchanted creature dies, Ranger's Bane is quite cheap with its cost of only 2 growth, and can be very usefull when you need to shred down the health of a tanky enemy creature.

Sister of the Fox:

The Sister of the Fox is one of the 2 different creature spells in this deck. A very cheap creature with a built-in card draw. A great blocker, as well as a great goal for your Faith Chains, Heritage, or for you Fertile Soil.

An amazing scroll to get your few creatures on the board, giving you the chance to either get a Kinfolk Veteran to attack your opponent, or to get a Sister of the Fox with 2 health and a built-in card draw.

With this card you get 1 immediate order as well as an additional blocker to save your idols from getting too much damage.

Also a possible target for your Heritage.

A save draw for a structure spell, and lets you draw further into your deck. Summons leads to your resource advantage when you draw a Memorial with it or it leads to an early Nog Nest, which can be indispensable for the early game.

One of your resource ramp scrolls. Can be triggered with pretty much everything in your deck (but still my preferred combo is a Woodland Memorial into a Heritage).