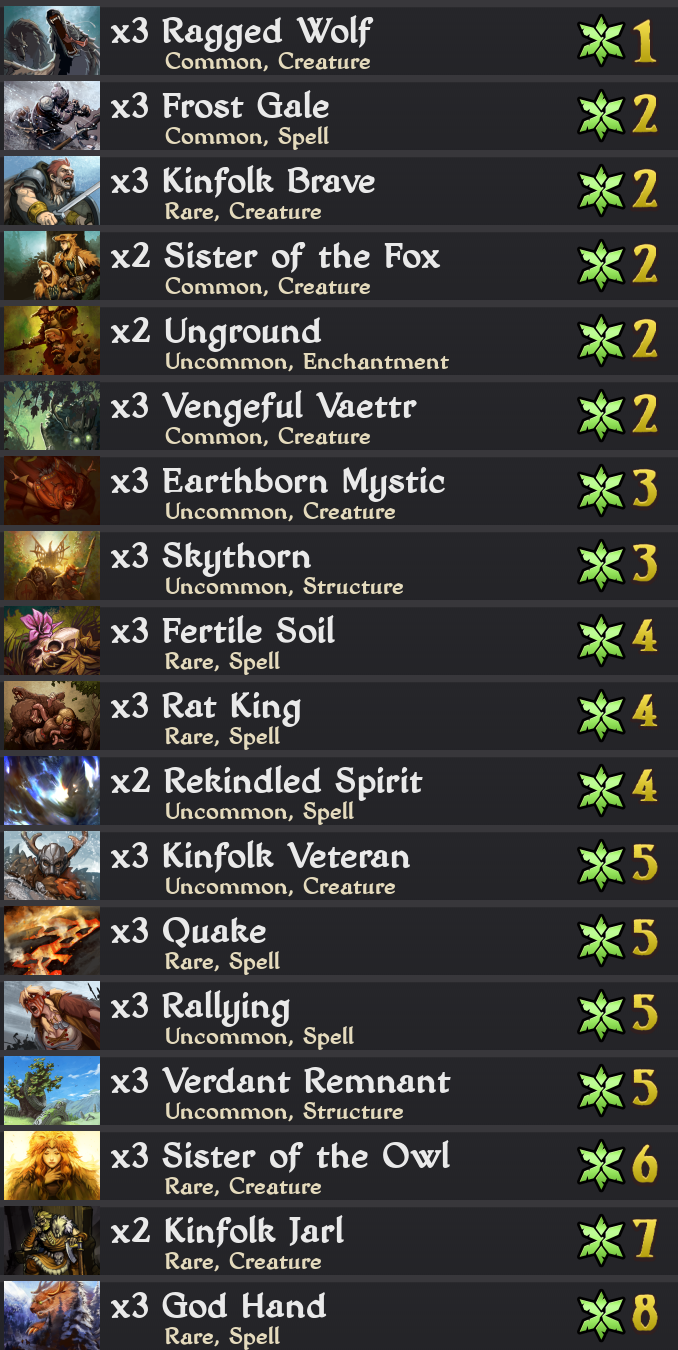 Update: Playing this deck at number 1 in the post-echoes "meta". The only game time I have lost was due to the bad luck of not drawing quake for half a game. Incrediably strong deck. The new unground has replaced seed. It offers a cost-efficient way to deal with high health and armoured units, which this deck lacked. Cycling ungrounds using mysitc is actually very effective. The lack of seed has not overly hurt this deck.

You should always be aiming for the lategame where you can have 10+  . I haven't played much LGG, but I like to think this deck is a little unique. I'm probably wrong.

In the early game, you must find a blanace between early board presence and ramp / getting value from your cards. Braves, mystics, breakers and veterans will help you contest board control. At the same time, you should be looking to make a hasty transition into the late game. Fertile soil, skythorn-rat king-sister, and vengeful vaetter will allow you to outramp your opponent while putting down blockers.

At some point you will likely lose board control in favour of ramp. Quake-frost gale will allow you to come back into the game, followed by a lot of haste and value units. As long as you stay away from potential lethal, it is OK to lose the board vs  ,  , or . Against  , try to keep board control and kill their doctors, rot eaters, and harvesters, as these prevent boardwipes from being effective. Ungrounds are great for killing high priority targets.

Once you hit 9-13 resources, you can start making the gaint plays that this deck depends on. You should continue to ramp, drawing off skythorns every turn and hasting your vaetters to get more resources. Plays like sister of the owl-rallying, rat king-godhand, and Jarl-rallying will help you dominate the board in the late game.

Crone is good in this deck because it helps you stall into the lategame while guaranteeing a 1:1 trade. Fangbear is a value threat, good for putting up some early game pressure, while also good in the late game with rallying or godhand. You might want to swap ungroud for Erfin Merf to take out larger units and wipe rows with relentless, or for Seed for some extra staying power on your big units. Binding root, dryadic power, and illthorn seed are all viable enchantments, but not optimal. Niara and Urlharld are very good top end threats against something like somata control.