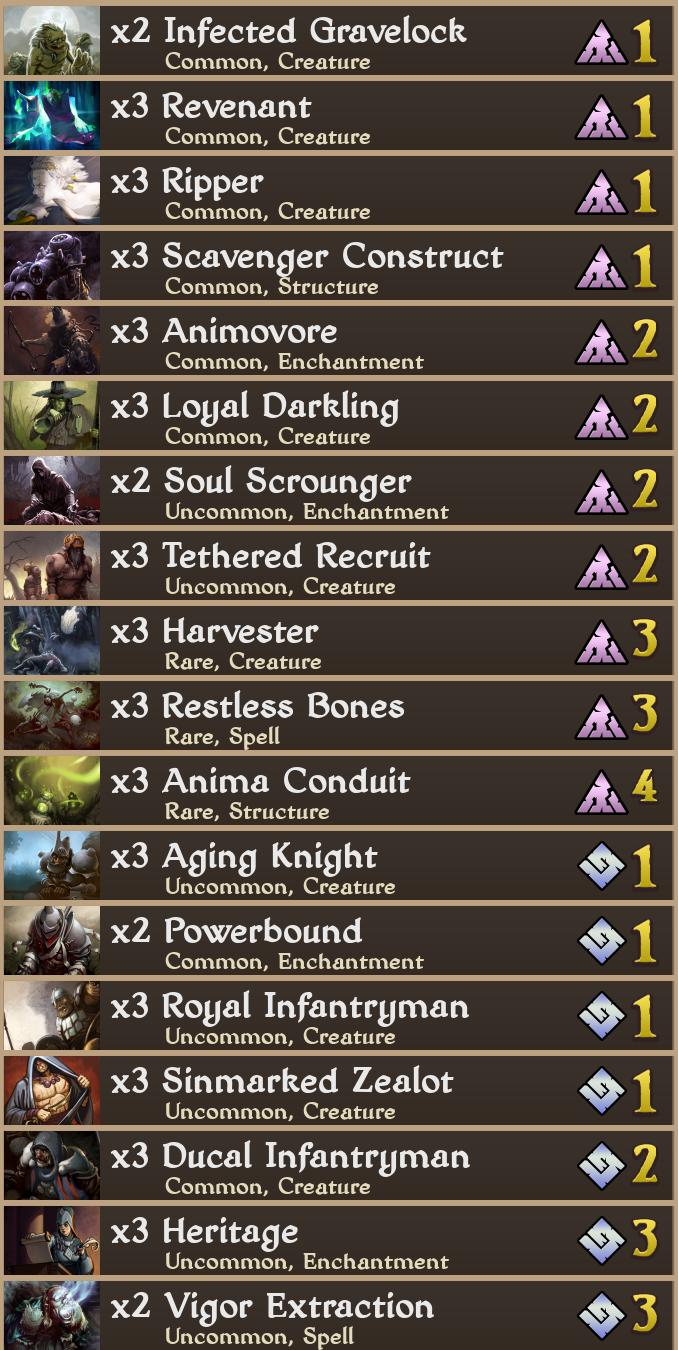 Hi and thank you for looking at my first deck!

This deck is designed around ramping Order and Decay really fast using Powerbound, Tethered Recruits and Vigor Extraction. Once you've got around 3 of each, you build mana without having to focus on it. After that comes the fun part! You focus on swarming the board and having your units do as much damage as they can to what ever they can before they die. Ideally you will be putting your opponent in a position where they don't want to kill any of your units but have no choice.

Here I'll talk about my choice of scolls and why I think they work (!These choices are made by someone with very little experience at ranked!)

please feel free to discuss why my choices should be different, I've still allot to learn.

Most of the units in the deck are extremly low cost, with the idea that you will be placing your whole hand onto the board each turn. One issue with this I've found is not drawing enough cards.

That is why I've included cards like Heritage and the Scavenger Construct+Animovore combo. You can build a steady rate of cards each turn, so long as your creatures are dieing. Combine this with the Anima Conduits and your side can become overwelming very quickly. Alternatives are low mana spells like Kabonk, Languid and Brain Lice, but I found directly placing creatures more useful than spending mana to draw creatures. I've tryed using Blightseed but found its not that useful when you want your cards to be dieing off, the only other target becomes the Harester, but then, do you really want to increase its CD for 2 cards and some resource? Maybe, It might suit a play style of "Draw More Scrolls, Play More Scrolls".

Harvesters fit in very well with this deck, You can protect them with the Scavenger Constructs and creature swarms, and they will triger each turn if you've got two Anima Conduits out (If 2 creatures die, that makes 4 Revenants, thats already 2 CD off, when the Revs die that another 4). I've tried the deck with Ilmire Rot Eaters, and it does work well, but they require more maintance, you have to move them around the Scavenger Contruct. It ends up fighting with it for space. Harvesters only need protecting.

I've been using Infected Gravelocks since the change to poison mechanics. For 2 , you get a 2,2,3 that pretty much kills any melee unit that touches it. Good for protecting units when you don't have a Construct up as well. You can also recycle/remove them off the board by using Animovore, it becomes a target for your opponent or you get free cards. As an alternative I've thought about mangy rats as they cost less, but their uses are limited compared to Gravelocks.

Lastly Rippers over Shamblers, now I'm not going to pad this out, I prefer playing Rippers mosty because I like the control you have, or rather I dislike shamblers for their lack of it. You want to be using your Rippers as a wall to protect your units, they are cheap and have no real purpose other than to feed your Contructs, Conduits and Harvesters. However, Reckless Bones + Shamblers is really, really good. Its all preference for this one.

This deck has a few tricks it can pull.

One fun trick you can do is, using Royal Infantryman's +1 HP bonus to kill your units on demand. When a Creatures last HP is only being sustained by a Royal Infantryman, if you just move it into a different lane, it will kill that Creature. You can use this to have your Harvester attack on that turn, or you can draw using Aminovore, or even just to make more room for new units. Most of the units in the deck have 2/3 hp so its not to difficult to pull off if your against Growth with 1 dmg units like wolves or rats. And don't forget those Conduits, producing 2,1,1 Revanants. Best of all its free, and if you've got a Restless Bones in your hand, you can pull off a quick hasted 4,0,1 for only 3 ! Not to mention it effects your current Undead as well.

Alternatively you could use the sacrifce mechanic on Sinmarked Zealots/Loyal Darkling, but its not as stylish :D.

When using Anima Conduits, I find it safest to put them in the top/bottom corners. Most of your opponents aggresion will be focused on the 3 middle lanes as they have to take atleast one of them to win. If you stack them next to each other as well, side by side in the same lane, you will force the on in the corner to spawn to its side. This gives you more control over where they will spawn, allowing you to move them into the middle row if you need to. Knowing where they will spawn is important for offensive reason and defensive. You can use the nearly spawned Revenant to block attacks from your opponent as well.

Powerbound combined with Tethered Recruit is a fairly complementary combo, A 2  1  scroll combo for a permanet 2 is real nice, especially when you want it to die off. I have found that players will directly avoid killing this unit as well, so it can net you some damage on its way to ruin.

A really strong opener as well, focus on making 2  for the Tethered Recruit, then 1  for the Powerbound. Suddenly your worth 2 3  on turn 3. From here you can keep gaining  and you will passively make  .

Lastly Ducal Infantryman, these guys are your secret weapon, you can turn any of your weedy 1 attack units into problems just by playing them. Use them on 2 Revenants and they suddenly become two 3 dmg missles, add Restless Bones and say good by to your Idol (5 attack each). Also great with the Harvester as you can plan when hes going to attack and move your Ducal man across the board. Lastly they can be used to tank as well since they have a respectable 3 hp for only 2 .

While the deck is a little "wavey" if you don't get any  Ramp or you don't get any units for a single turn, you can turn the tide with the low cost units and overwelm your opponent with some fast combos and Idol snipes.

Thanks for reading and feel free to give me feedback