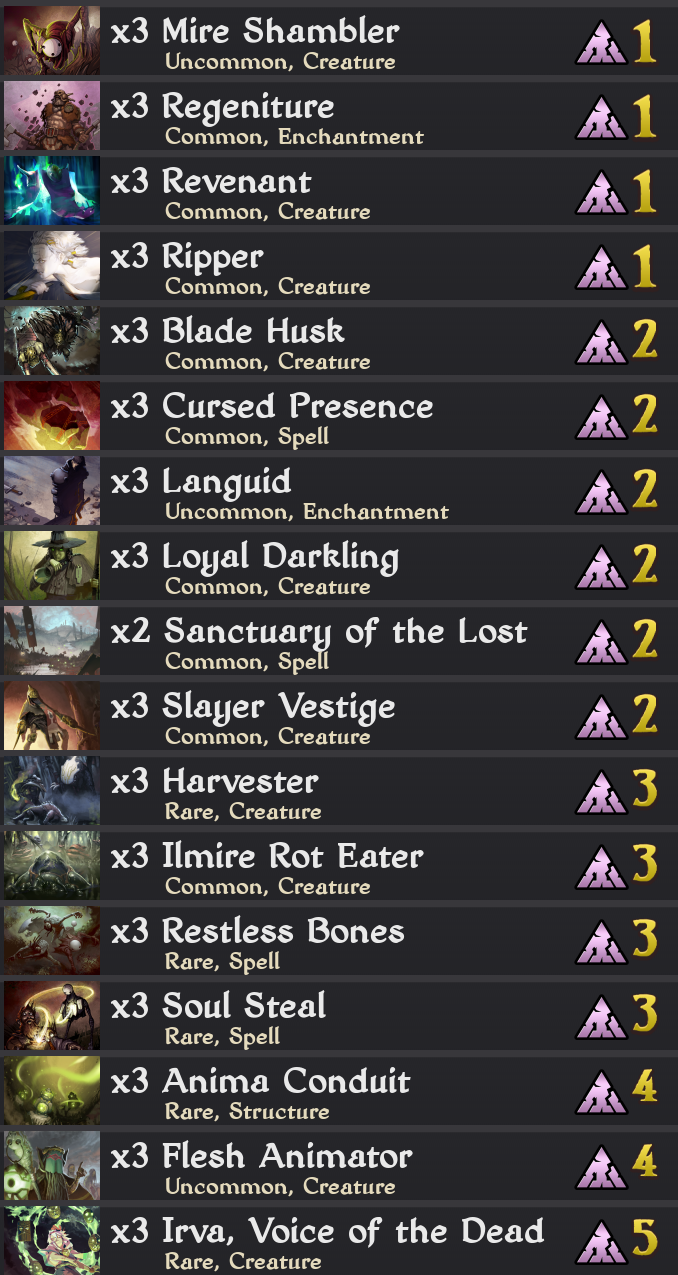 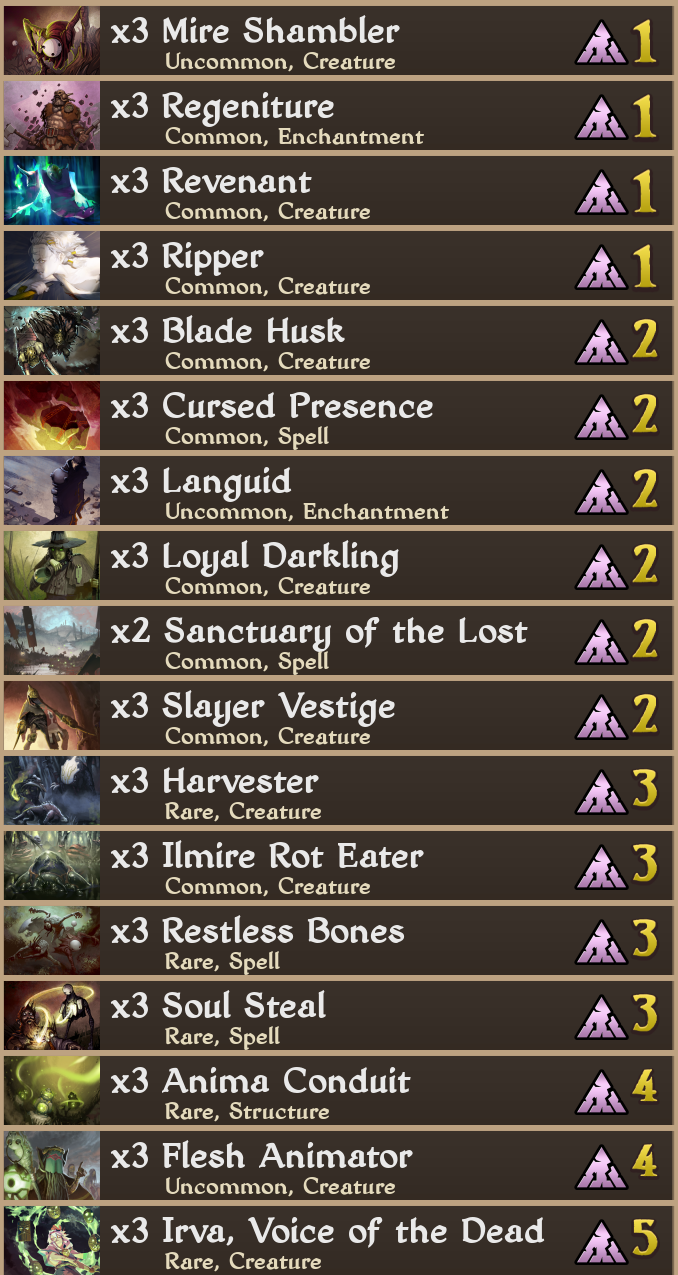 After a talk with Alpha_Century, he has shown me the light of Ire and Bile. Unfortunantely, he's rejected the cult of Wicked Being.

This deck's got me up to 1750, taken a few scalps and it's still letting me climb the ranks!

THINGS THAT ARE IN THE DECK

Sanctuary of the Lost: This is a great solution to the energy issue, and lets you last a little longer vs  LGO/DO Stall, which this deck already demolishes. Pretty much every deck aside from growth uses lots of removal spells/enchants, so this is a solid card in most matchups.

Mire Shambler: These guys are little jerks who, when used well, basically have move 2. Also, they're undead, and not vanilla husks, so pretty much a must-have.

Ripper: A solid creature. This deck needs more conduit fodder that has a countdown less than 3, and ripper fits the slot.

Revenant: most of the time you'll  sac these things, but with a Restless Bones, they can wreak some havoc on enemy...stuff.

Blade Husk: I love this guy. Aside from lots of attack power, with a well-timed restless bones, they can kill a lot of stuff and surprise your opponent. Also, its dominion effect is really useful for working with Irva.

Languid: This is an iffy scroll, but it's the only thing that lets you draw, which is kind of important. Since it's cheaper than brain lice, I went with it. Also, not having your stuff die when you don't want them to is nice.

Loyal Darkling: Basically how you end games. Once you get one (or three) idols to 2 or less HP, use this useful suicide bomber to finish them off. The best part of this scroll isn't winning with it: it's your opponent's reaction to you winning with it.

Slayer Vestige: This is good at killing things (everything's a lot of things) and undead. Auto-include, especially with the relatively (compared to rest of deck) high 3 HP.

Harvester: Your conduits spit out revenants, and revenants die. Harvester gets scary, and kills your enemy's stuff. So it's quite nice.

Illmire Rot Eater: It's like the harvester, but it gets big. Against growth especially, you'll see these guys become terrifying monsters that smash everything in their path. Fun stuff.

Restless Bones: Basically the engine of this deck. Use this to strategically kill your opponent's idols/creatures.

Regeniture: This took Wicked Being's spot since it solves 2 issues: the direct idol damage solution (which darklings do as well) and the issue of having a lot of glass cannons. Tribesman stole this spot.

Anima Conduit: Spits out revanants, and generally really, REALLY good. Use wisely. Only place this thing when you have a board prescence; you need to have stuff for your opponent to kill for it to be actually useful.

Flesh Animator: Basically makes your undead baddies have a CD of 2. Kinda expensive, but it's a nice weapon against Energy, as this guy + Shroud +Restless Bones is ridiculous, and your glass cannons have to shatter their glass cannons.

Irva, Voice of the Dead: Irma serves your enemies on a plate. Pretend she's a magical spell that just wipes a lane, and then proceeds to take out idols and creatures ruthlessely (sp?) in the following turns. There are three, because that's three times as likely to demolish lanes. Make sure she's first played as a surprise, and watch her with attack orders; she makes life hard for your opponent because of the whole 'killing stuff' thing, but makes life hard for you because math is hard.

More stuff on Irva for piloting.

STUFF YOU MIGHT WANT TO PUT IN THE DECK

Wicked Being: While playing undead decay for so long, I notice that it's really easy to get an idol to 4 health, and then your opponent will actually guard it. Because killing big stuff is sometimes hard, this works well to ignore the big stuff your opponents pop on the field, and finish them off.

Watcher: I've tested this scroll, and run it a few times, but it seems like this is either an idol sniper or a shield. Regeniture's a much better scroll to run: pop it on one of your creatures for a good blocker, or put it on an enemy to get that last bit of idol damage.

Shroud of Unlife: Use this with Flesh Animators, or other non-zombies to count down the undead with Restless Bones. However, it tends to be a fairly dead draw, since most of your creatures are already undead.

Unbind: Decent against decay, but otherwise useless. I don't run them, because this deck already tends to fare well against decay without these things, as Anima Conduits apparently double as Vaccination Stations with the blight jumping to revenants.

Ire and Bile: This nice card is great removal, and well timed, can be as effective as a restless bones board wipe. Just remember to watch for the counterattack. A kinfolk veteran can snipe anything in the deck (aside from a gigantic rot eater) after this has been played, so use with caution. However, it's not as good as a ripper, so I don't run it anymore.

Soul Scrounger: In my previous deck, I never bothered playing this card, and so I didn't bother running it this time either. Maybe it would be good?

Blessing of Haste: This deck is thirsty for cdR, and it gives it. The only problem is that this card is ORDER. Still, it's quite playable.

Damning Curse: More removal is always good, however, it's not in for two reasons: how damn expensive it is, and the deck's creatures die regularly enough with just one caller trying to kill them.

Illmire Tribesman: Took Regeniture's spots, for a little while. It fulfilled the blocker role, while being a warm body. Basically, it's a tradeoff of versatility for effectiveness of one job. It's important to note that this deck has MUCH less direct idol damage potential.

HOW TO PILOT THIS DECK

With this bizarro decklist that works better than I expected, here goes the explanation of how to use it:

In the order that events will happen, here goes, in 3 steps:

Learn how to use your shamblers well. These guys are essential for your early board prescence. Just a tip: a shambler on the back of the board can go to any lane with just 2 units. This deserves a spot of its own, because three shamblers can wipe lanes, even if they're the only things on your side. With some cleverness, luck, and knowledge of statistics, these guys become completely OP. OP things are good to have.

Kill all the things: An even board is an issue for everyone; the deck is basically a pile of glass cannons. Keep the board state hard to read, and don't be afraid of bluffing either.

The toughest part of piloting this deck, I've found, is knowing when to snipe an idol/take one down. As a general rule, you can deal 2 increments of 2 idol damage with no board prescence, through your Darklings. That being said, a lot of that part is just intuition and experience.

Saccing Irva is a comittal decision. An important thing to rember however, is that she's a unit that thrives in a crowded board. Don't be afraid of saccing an Irva in your starting hand or using her as a meat shield; she's one of many cogs in the machine, and knowing when this cog works is very important.

MOAR removal variation: Messed with ratios, I think that's all.

After seeing the light, I added sanctuary of the lost.

Because I didn't like state machines, I added in BOH + Focus. I then proceeded to complain about the lack of Decay spells with Replenish. This thing was OK, but nowhere near the caliber of the two decks sandwiching it.