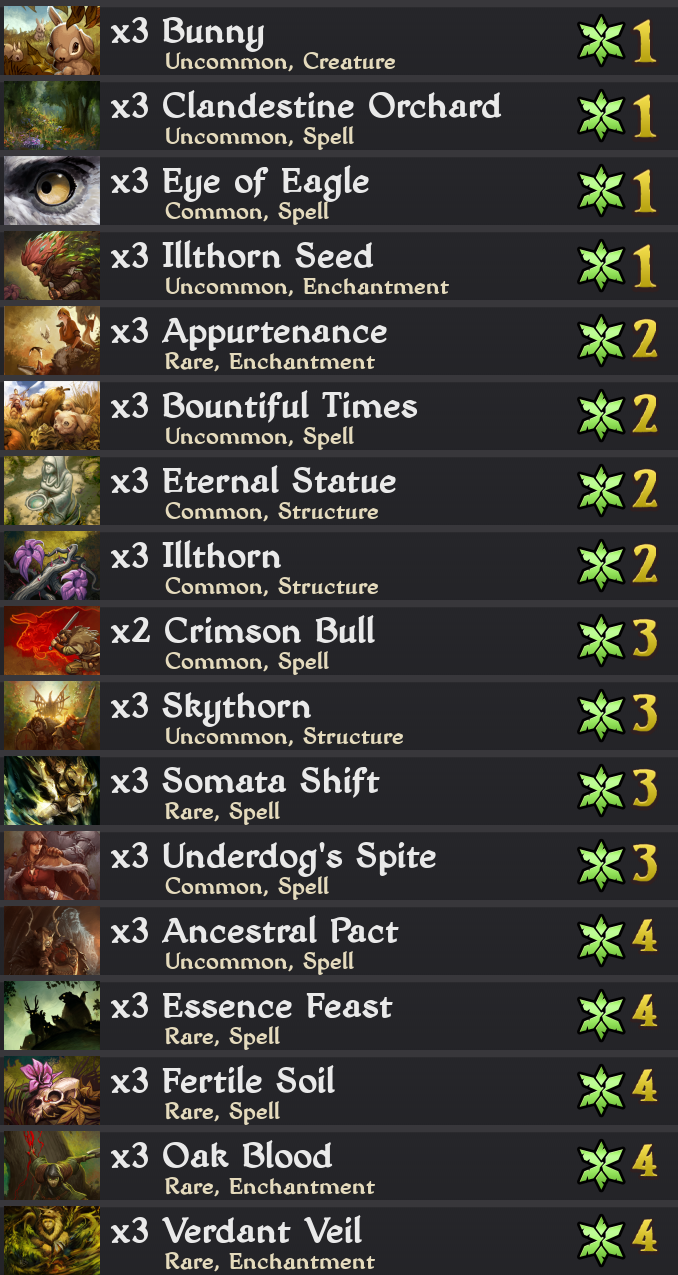 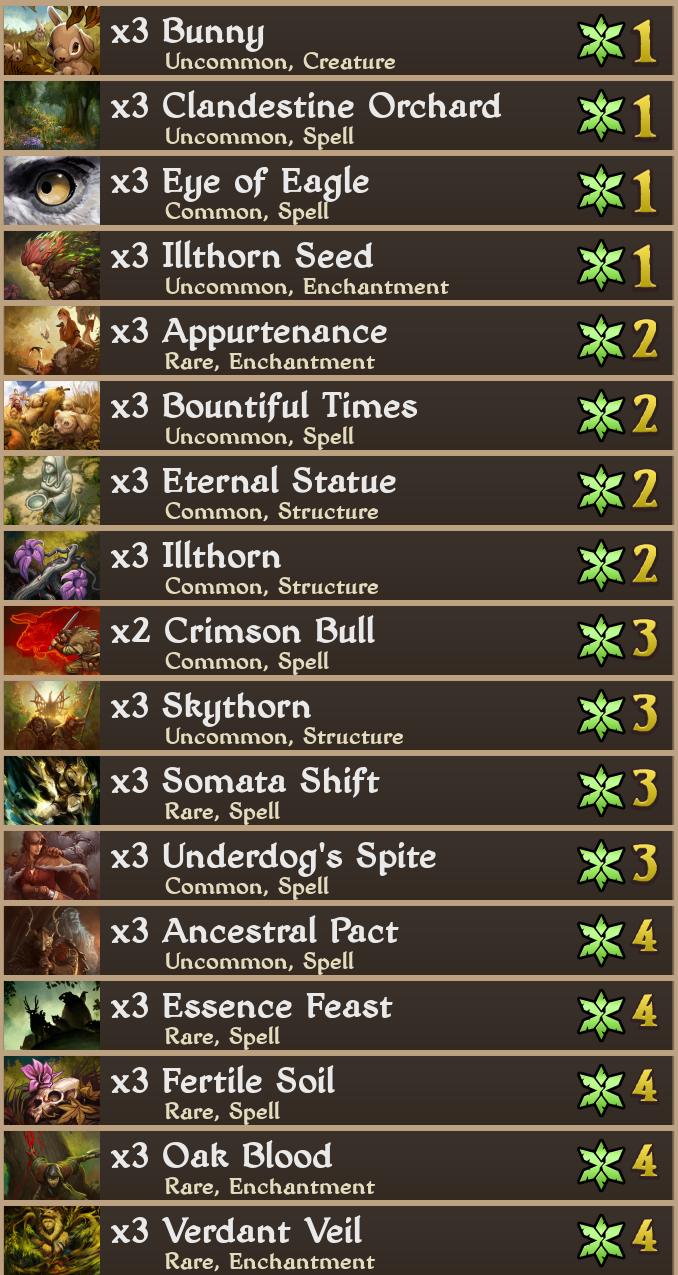 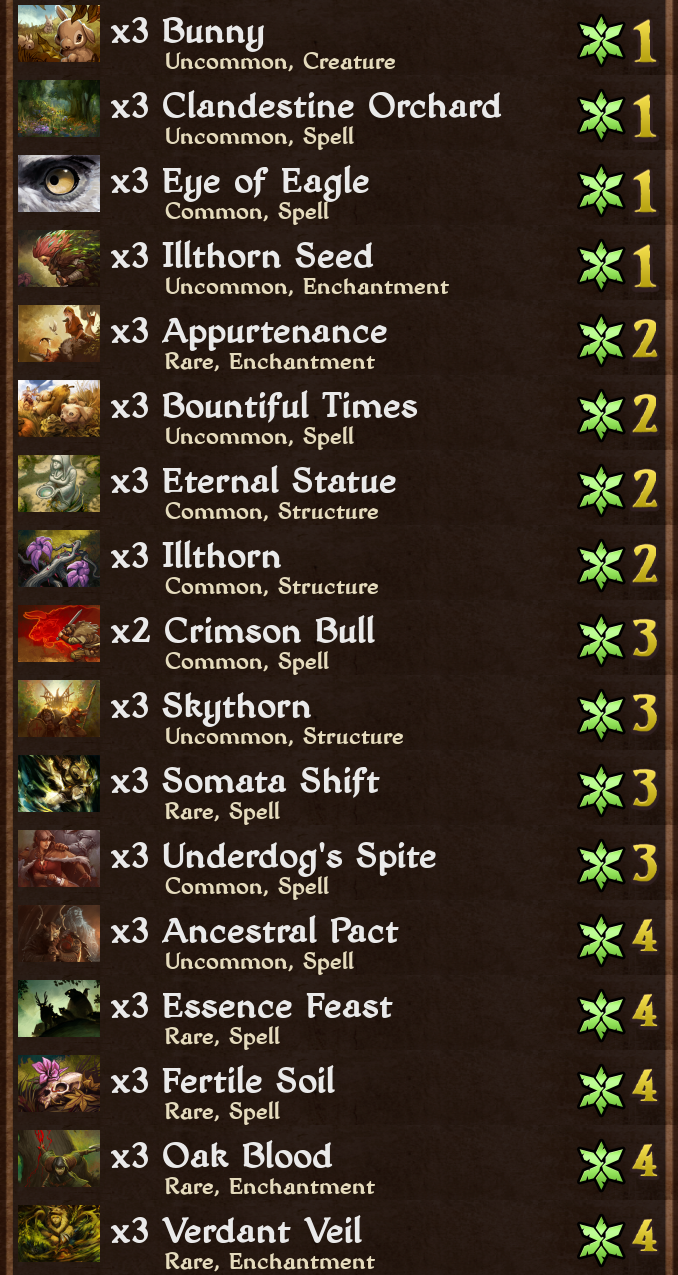 Please note that the goal of this deck is not to win, but to obtain and maintain a boardfull of bunnies for the longest amount of time possible. We don't have to fight all day! Look at those cute bunnies!

You shouldn't need to sacrifice for more than four or five Growth, but you should sacrifice for scrolls a lot in order to cycle through the deck once or twice in order to get plenty of the same scrolls over and over. Fertile Soil and Ancestral Pact will let you draw more scrolls, by sacrificing a spare bunny or when you think your bunnies are about to die anyway. Skythorn will also give you scrolls once in a while when in play.

Use Bunny, Bountiful Times, Somata Shift and Eye of Eagle to put bunnies on the board. I thought I was really clever for coming up with that combo, but it's been done before. Either way, Bountiful Times places a bunny and makes all existing bunnies mutliply at the same time, and Somata Shift is perfect because it will summon a bunny with two health, which would have been a bad thing if it wasn't twice its normal health.

Use Eternal Statue, Skythorn and Illthorn (Seed) to protect your bunnies at the start of the game, when they're doing their thing. The statue will regenerate so that it can't be defeated by small attacks, and the thorns will make your opponent reluctant to send their good creatures.

Use Clandestine Orchard and Underdog's Spite to speed up the breeding a little bit. Everything multiplies when you use spite, and if you use the orchard when they're about to breed you'll have to wait a little bit less for next time.

When you have enough bunnies, you can start enchanting them with Verdant Veil, Oak Blood, and best of all, Appurtenance. Veil gives three health and Ward, blood gives six health, but Appurtenance can give up to fifteen health, and is also the cheapest. It would be much harder to wipe them out now.

Finally, Crimson Bull and Essence Spirit are your emergency cards. Use the spirit in order to heal your idols if they are badly damage, and the bull if your bunnies are under serious threat. Otherwise, you can just sacrifice it.

And that's it! I'm hoping this deck is the most effective one for obtaining bunnies, and that it's fun to play.