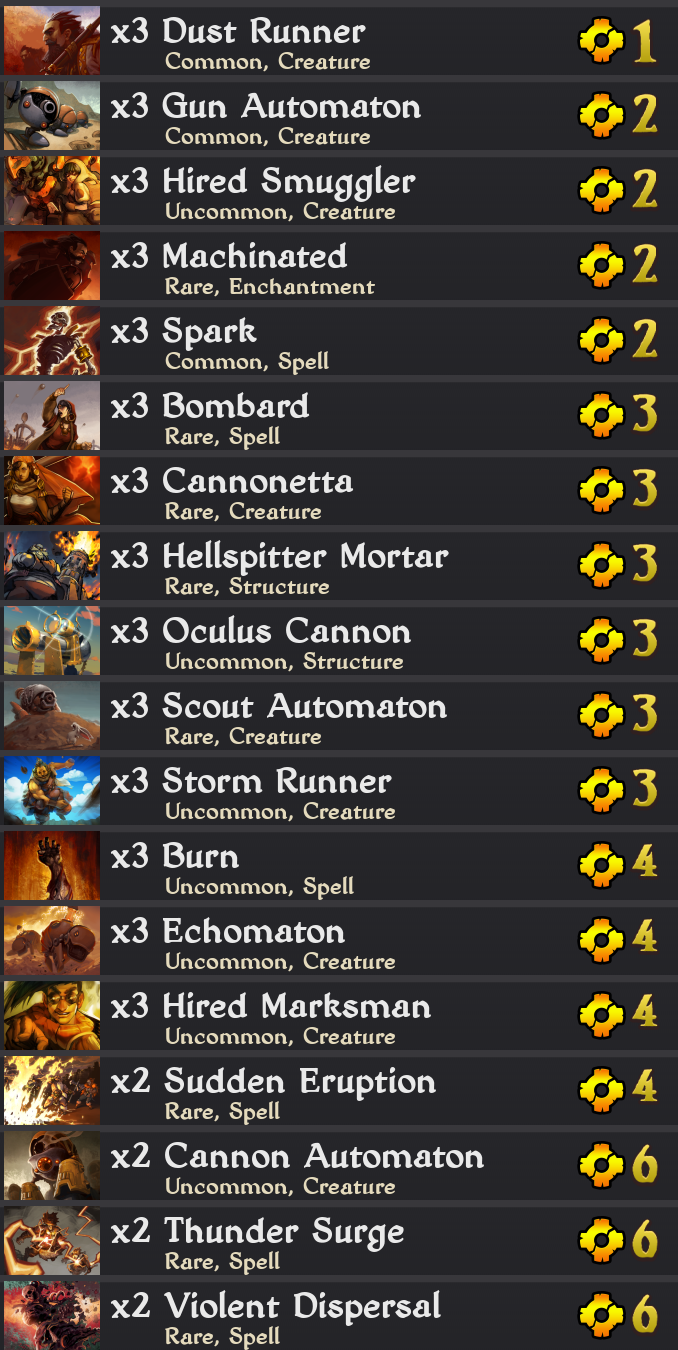 This is the latest reincarnation of the e-midrange deck that revolves around Ranged attack units. Every unit in this deck, with the sole exception of the echomaton, can be counted down using Bombard - which means that you can always be sure to make use of each scroll in your deck. Everything is solid on its own as well, and there's zero required combo pieces in this deck.

If you go second and you've seen your opponent sacrifice for  , you'll want to make sure to mulligan in the event you don't have a hand that consists of Dust Runners/Sparks/Gun Automatons. Hired Smuggler and 3+ Cost scrolls would be cause for a mulligan as a result of her being incredibly awkward to play out and defend (killed by double Ragged wolf, killed by Kinfolk Brave, killed by Ragged wolf and Stag heart). You're going to put so much effort into protecting her that it simply won't be worth it. With the Dust Runner on turn 1 on the otherhand, you'll be in a much better position to counter the early-game aggression with the likes of a turn 2 Gun Automaton followed up by a turn 3 Hellspitter Mortar as a wall.

Versus   , you should try to get out a Gun Automaton on turn 2 and hold onto a Spark you get, as we have here just like with the Growth matchup the problem of an Aging Knight easily threating a turn 2 Hired Smuggler.

Versus both   and   , you can try to gear towards a higher-curved hand at the start of your game, ideally something that tops out at 4 Energy - like a Burn or Echomaton.

This deck will most likely lose out in the late-game if you run up against a dedicated control-type deck with numerous means of taking back control of the board and in the case of Order - heal up any damage you've done to your Idols. Don't be afraid to go for the Idols when it looks like there's no immediate loss looming over your head or the loss of your entire board. Hellspitter Mortars and Oculus Cannons work great at protecting the units you have on the board (Mortars by being a cheap and beefy wall; Cannons by limiting your opponent's movements) so that you can whittle down your opponent's Idols. Don't be afraid of using Machinated just to get an opponent Idol down to 1 or 2 Health - you can always finish it off later on in the game with piercing damage from a Bombard+Oculus Cannon/Cannonetta play.

Echomatons are your friend versus practically every resource type and archetype, but will be harder to gain Energy from versus  if you play them carelessly - as they have Kinfolk Veterans that perfectly removes them. A tip is to put out 2x Scout Automatons on the board - which will increase the attack of your Echomaton so that it'll always give your the Energy.

Hired Marksman is an excellent zoning tool, enabling you to get at units behind walls with his ability, which can be really handy when you want to avoid certain unit abilities to go off such as the Ilmire Roteater or the Witch Doctor. He is excellent up against   match-ups as his 4 Health makes him awkward to deal with (often requiring 2 cards, such as a Spark and a Burn) while his ability attack can snipe off an un-buffed Echomaton - denying your Energy opponent the free Energy off its ability.

Why not the following scrolls?

Automata Forge  - I decided to skip out on this thing because it promotes an ineffecient playstyle that a lot of players have simply accepted as a result of Energy as a Resource type having easy access to abundance of resources and a lack of card draw. What I've found though is that with this deck, you're very rarely actually going to have left over Energy, thanks to the wealth of scrolls concentrated in the 1-4 Energy cost range. That means that later turns, such as when you have 9 Energy, often entails playing multiple cheaper scrolls - such as a Oculus Cannon+Cannonetta+Dust Runner+Bombard to clear your opponent's board. Similarly, with it out of the playing field, I haven't seen a reason to add the likes of  Overdrive which only really is a useful scroll if you have both Automata Forge and Oculus Cannon in your deck (even then though, it's a combo piece that only functions with approximately 12% of the scrolls in your deck.)

Ironclad Reaver - This is on paper a unit that provides value, at 5-energy giving you a 4/2/5 body that promotes hitting the opponent's Idol while simultaniously blocking your other units so that your board presence can be preserved even when your opponent has the number advantage. He could very well work in place of the Cannon Automaton, should you desire to put him in. Personally, it's his lack of Ranged attack that made me go with the Cannon Automaton over him, as a result of the Bombard synergy. With the Ironclad Reaver in the deck, I'd have to pick another scroll to reduce its countdown such as the Iron Whip or Fury in order to more reliably get him to attack - and I dislike those scrolls for being relatively poor for what they do (being a poor man's blessing, or a poor man's spark.) Trading effeciency for versatility might work in other decks, but makes a deck such as this much more unreliable.

Fulmination Conduit/Power Trip/Thea/Iron Ogre - These were all omitted from the deck, and should probably not be switched in if you wish to play this deck as I've more or less described it, as they promote a wholly different playstyle than what I'm trying to achieve with Steady-state Energy. They are very dependant on pulling off combos at the right time, and I've found that when playing against these decks I often get as much Energy as they get through current Energy increases - when you spread it out over several turns. While a player with a Thea/Iron Ogre deck sacs for more scrolls to get the pieces for their combo, I can with this deck just play Echomatons and sac for Energy to get to really high resource counts that stay that high throughout the game - enabling me to pull of expensive plays turn after turn.

Scrolls to swap in

Boom Reaver - Versus aggro type decks, a Hellspitter Mortar as a wall mightn't be enough, and you might prefer more 3-cost creatures to ensure your Dust Runner/Gun Automaton is followed up with yet another versatile attacker. This is the reason I got the Scout Automaton in the deck, as it with its 3-HP and 1 Armor is probably the best 3-drop creature in the game versus aggro playstyles. But you don't always get the Scout Automaton, which is why something like a Boom Reaver might be worthwhile to swap in - getting rid of 2xSudden Eruptions or 3xHellspitter Mortars.

Tempest Reaver - The younger brother of the Ironclad Reaver, who might be wortwhile putting into the deck instead of the Cannon Automatons as he at 2-less Energy essentially provides slightly less blocking utility with his 4HP and 1 Armor but the benefit being that you can put him out much, much earlier. Furthermore, his variable attack can be incredibly handy to have access to as you can finetune your energy expenditure to essentially have him function as a Spark (2 current Energy saved), a Burn (3 current Energy saved), or a Violent Dispersal (8 current Energy saved) - to deal with anything from a small opponent unit to a big one.

Stone Enigma - Running in too many decks playing Skull Shrine and Halls of Oum Lasa? Try replacing the Sudden Eruption with 2xStone Enigmas. They provide you virtual card advantage (the 1+ Energy being equivalent to two scrolls), and will swing tempo in your favour if they manage to destroy an opponent Lingering spell - especially one such as Halls of Oum Lasa.