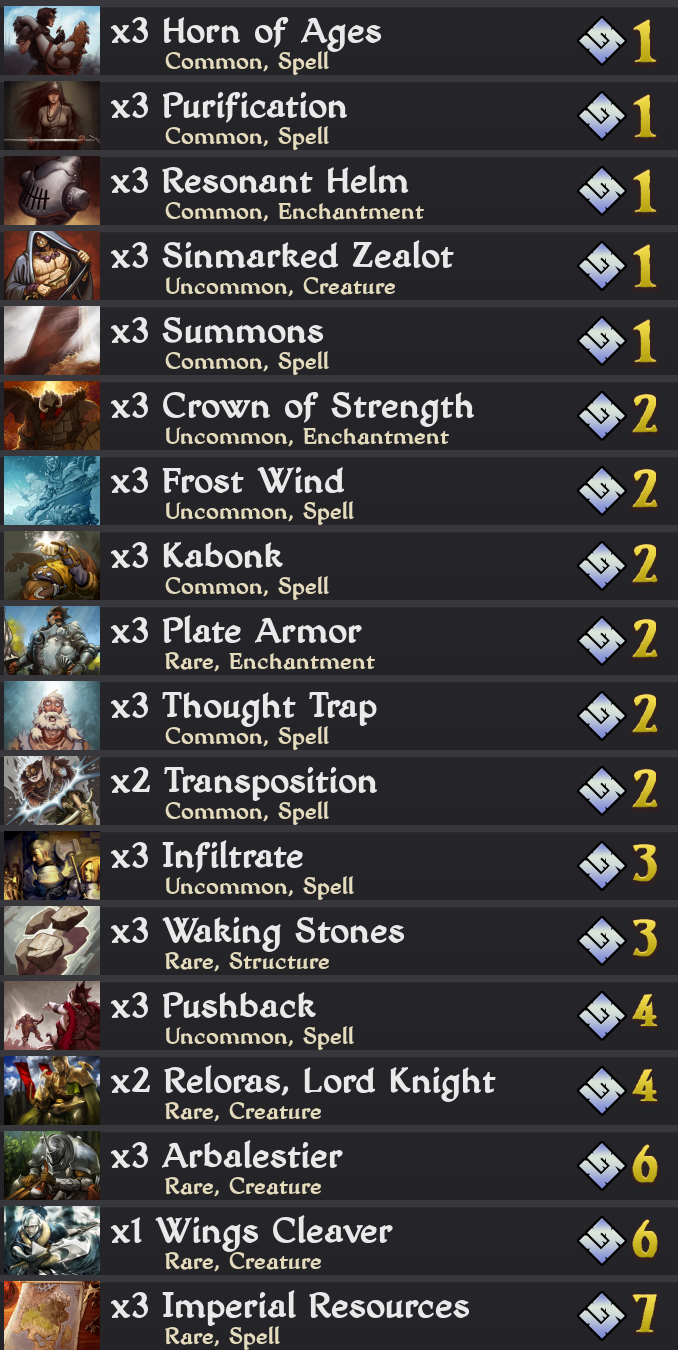 This is the buffed Waking Stones Deck i used to beat the hard Pestilence Trial (in my opinion the hardest trial). You can use it for at lot of other trials as well, the idea stays the same - just switch some cards like Purification, Transposition, with ones you think more fit; e.g. more creatures or Soldiers Bond to make your Waking Stones real working horses.

Summary: Get your Waking Stones out, buff them, delay the enemy from attacking, build up Ressources, hit the enemy hard.

Waking Stones: They are the key to master the trial. Don't play them out to early, you want them to survive for as long as u need to play Resonant Helm, Crown of Strength, Plate Armor on it.

Crown of Strength, Plate Armor, Resonant Helm: One for each Waking Stone, to increase their health and constantly heal them by playing Spells.

Summons: Helps you to get your Waking Stones. Notice, that it will sift the top most Waking Stone from your deck, so it's better to use it not right away if not desperatly needed (e.g. Waking Stones are on positions 13, 31, 47 in your deck - Summons will grab the one on pos. 13, and you'll wait a long time for the next one). Keep one in hand later on, in case the enemy destroys one of your Stones (you can sift it from the graveyard)

Purification: Good to keep one in hand. The enemy may play Searing Shackles on your Waking Stones. When you need to remove the Searing Shackle try to time it right, because you'll loose all other enchantments casted on your Waking Stone as well. Best is to wait until your deck is near to the end, so the enchantments will be reshuffled in your new deck again. Try to collect some countdown increasing Spells before playing Purification, to protect your 'naked' Waking Stone.

Transposition: Useful to switch places of two Waking Stones if one is infected with Searing Shackles and the idol behind is low in health. And you get one card - yeah.

Horn of Ages: Sometimes useful to prevent the enemy from moving the units, which are about to attack, in front of your Waking Stones. And with 1 cost it's an cheap Spell for the late game to get your Arbalestiers to attack.

Imperial Ressources: You'll need to increase your Ressources and heal the shackled idols. And card draw of course.

Sinmarked Zealot: Sometimes useful to deal 2 damage to an unit, or to protect a idol in times of great need. Not essential for the deck though.

Arbalestier, Wings Cleaver: When you gained enough Ressources and have three buffed Waking Stones - use them to finish off your enemy.