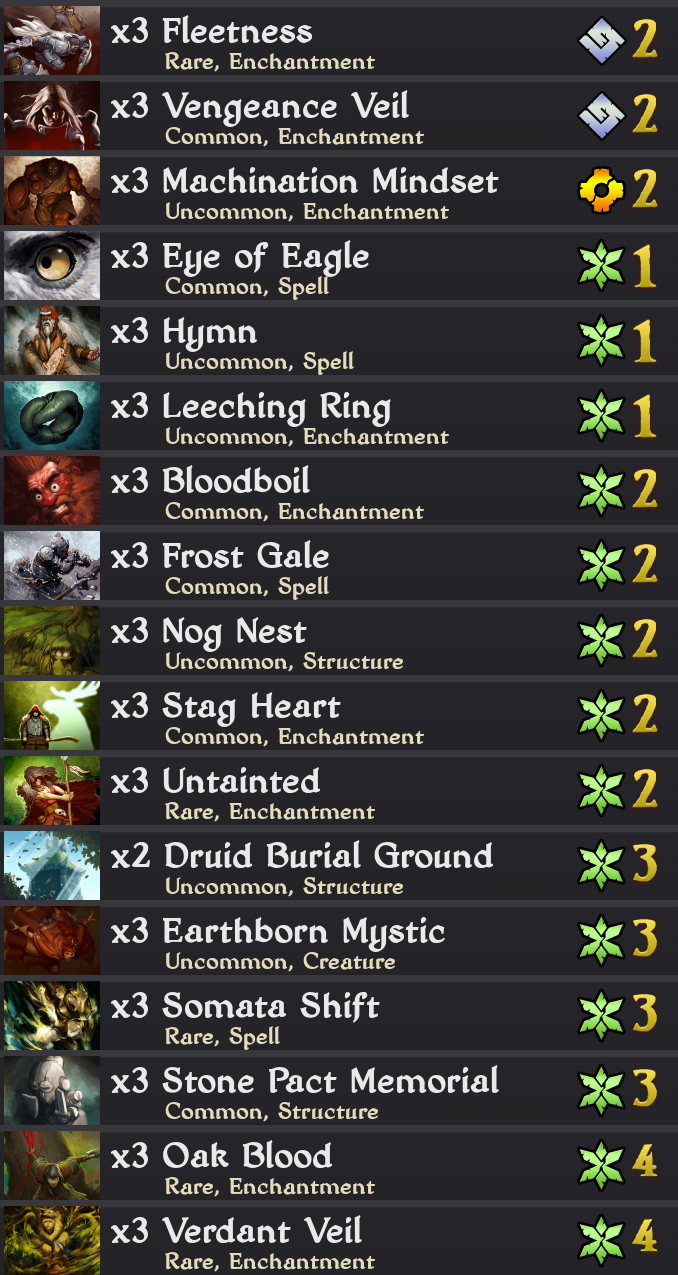 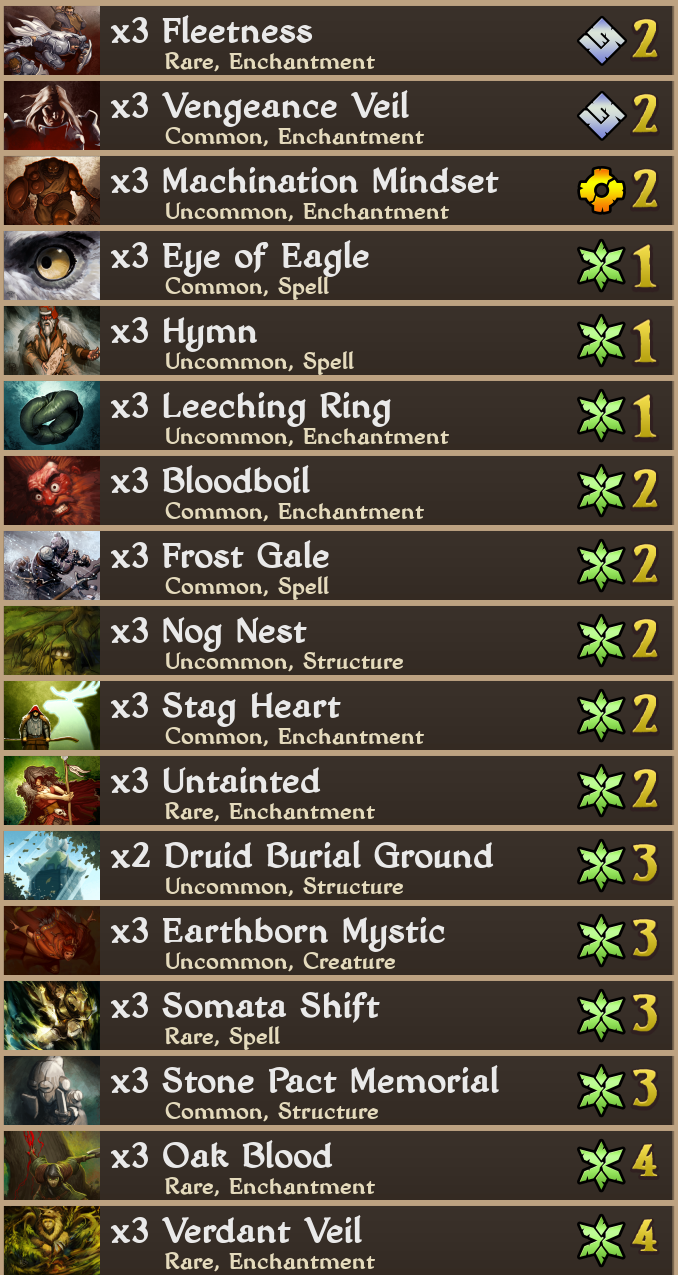 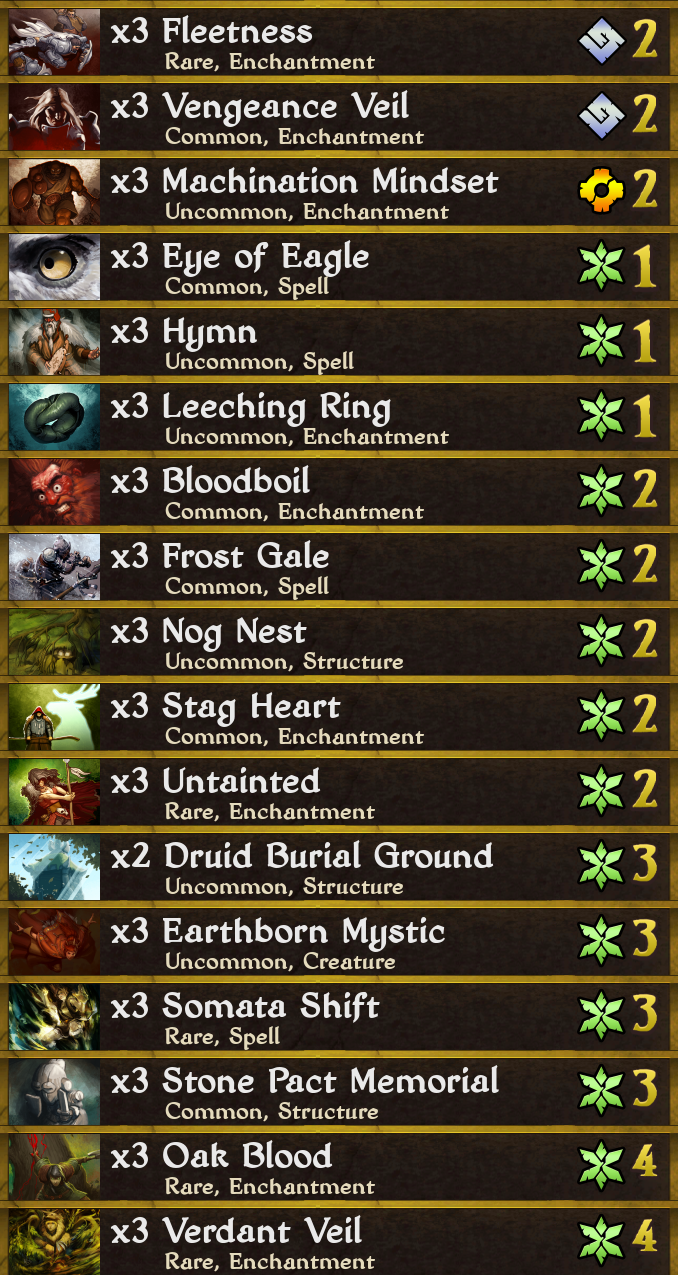 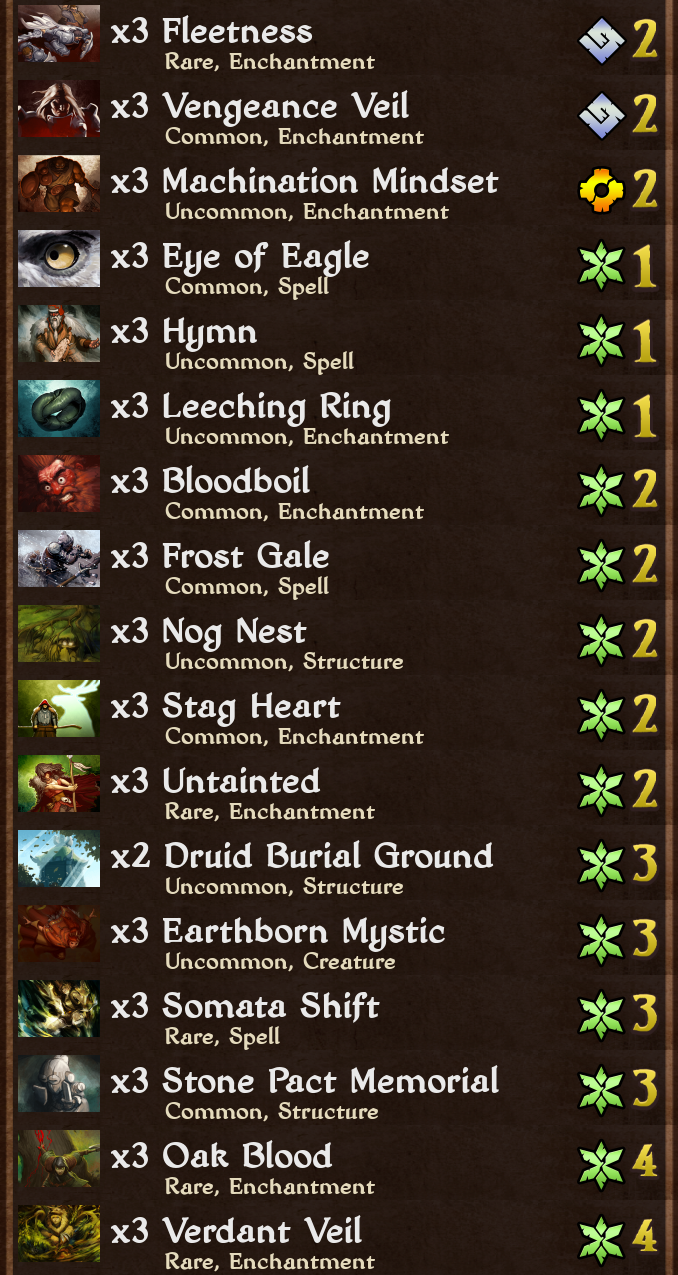 Credits to Eye_Theta for mystic combo (http://scrolldier.com/deck/2492). I did not like his win condition, so I modified it.

Mystic + Vengeance Veil allows you to draw "infinite" enchantments as long as her health remains above 0. She still takes 1 damage per draw, of course. Fleetness ensures that we are able to do this every turn.

Mystic can be pulled out through Eye of Eagle or Somata, so she is easy to find. Vengeance veil less so; strongly preffered in opening hand.

We use Untainted and Verdant Veil to gain ward. Then we pull out massive health buffs and heals to ensure her survival.

In the early-game structures such as Druid Burial and Nog Nest help with that.

As she takes damage we can also heal her via Hymn (can be insane) and Leeching Ring, which synergizes with relentless; see below.

If you put Bloodboil on her, her attack grows VERY rapidly. We can then put Machinaton Mindset on her for a 50-damage-something relentless. This is our win condition.

There are also Frost Gales in there for stall and possibly trigger Vengeance while she does not have magic armor (Oak Blood).

Now, the deck uses three resources, but we will mainly sac for growth. Order can be worth going for, but never energy. We do have some order ramp, but other than that bloodboil-replinish is a great way to get the non-growth enchantments out. The difficult part is getting Vengeance Veil out, after that we are bound to pull into Bloodboil and Machinaton sooner rather than later.

I recommend going for new hands if it does not have Vengeance Veil. Verdant Veil hands may also be good to keep: they are ten times better than Untainted. Still, Untainted is a decent replacement draw, while Vengeance has no such alter ego. Avoid going for unwarded mystics unless you are facing growth.

The deck seems pretty much broken and the combo is quick and reliable to the point where it can win over aggro-growth in idol-beating without much board interaction. I have not tested it extensively, though. Fun to play just for being so silly: 80 damage warded relentless mystic that attacks each turn on turn 12-ish is definetly within the realm of possibility. Well, if you have not won by then, at least.