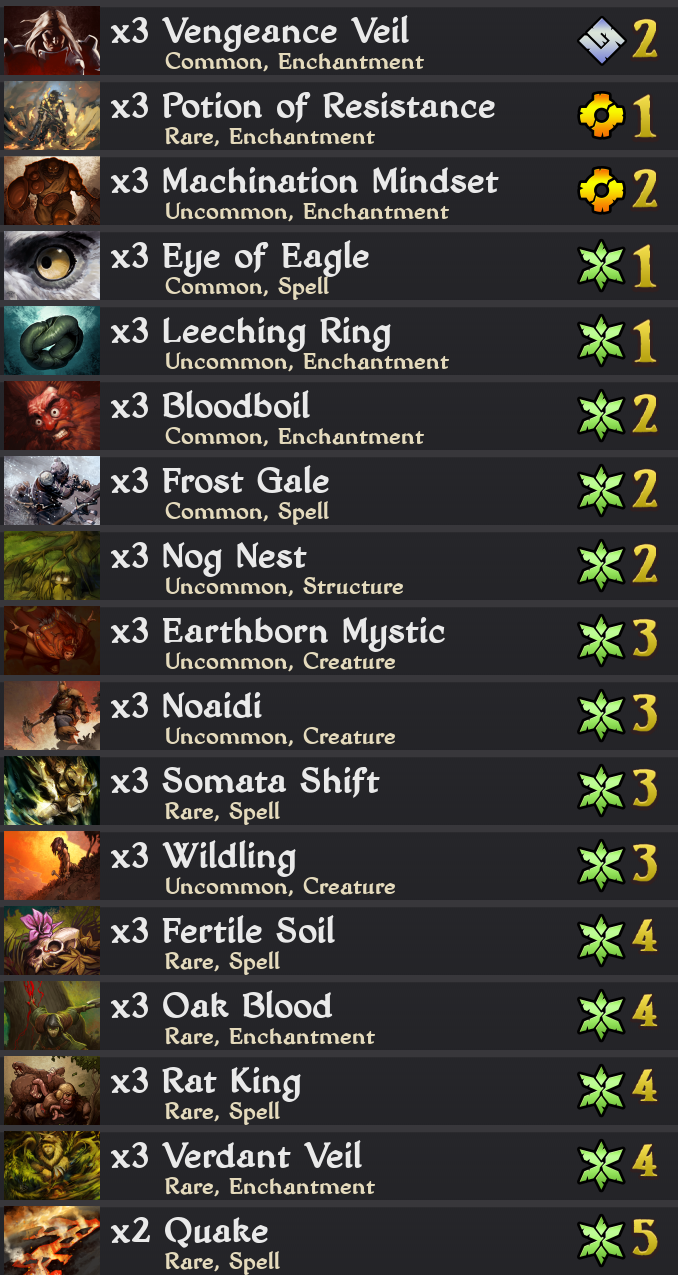 Veiled Mystic: A Combo Deck
Score: 3 - by Alpha_Century - 5 years ago

This is a combo deck inspired by this deck by kizu, with a fair few changes to make it more consistent. Still a mostly for fun deck, I haven't had the balls to take it to ranked, but it can destroy a lot of the hard trials. The main combo this deck is based around is Earthborn Mystic + Bloodboil + Vengeance Veil + Machination Mindset + Oak Blood/Verdent Veil + Leeching Ring, which allows for an infinite attack relentless mystic and infinite enchantment draw. This is a lot easier to get down than it looks.

Early on you're going to want to get up to 4 or so reasources, and look for any parts of the combo you are missing. The most important scrolls to have early are bloodboil and vengence veil. You will want to draw your opponents early forces to one side of the board by playing a nogs nest or wildling or something else they feel they have to deal with. Then you're going to want to play your combo creature on the other side of the board where it is safe for a few turns. This should be a mystic, although a wildling is also very good for combos. Ideally next turn you will play a health buff on it, verdant veil is very good as it also gives ward. When the mystic's health becomes 0, that is when you make your play. Bloodboil (alternatively noadi) into vengence veil, and then you can use the mystics ability multiple times to hopefully draw the rest of the combo. If you draw it, play machination mindset with your wild. In the next turn or so, make sure you play potion of resistance and verdant veil on the mystic, which will make it unkillable, as well as multiple leeching rings to keep its health high. Once the mystic is on the feild it is pretty much gg, just protect your idols with rat king, potion of resistance and nogs nest, and use quake and frost gale to make the mystic attack every turn.

The downside of combo decks is that they are usually unreliable. However, this deck includes many alternatives so that if you cannot draw a certain scroll you can still play the combo. Wilding is still good for bloodboil + machination mindset + leeching ring combos, which are also very powerful. Somata shift and eye of eagle both have 1/3 chance of giving a mystic and 1/3 chance of a wildling. If you don't have bloodboil you can still get wild through noadi, and play bloodboil later. Vengeance veil has no alternative although it is not needed on a wildling. Once you get mystic + vengeance veil you will usually be able to draw into the rest of the combo and the means to protect it.