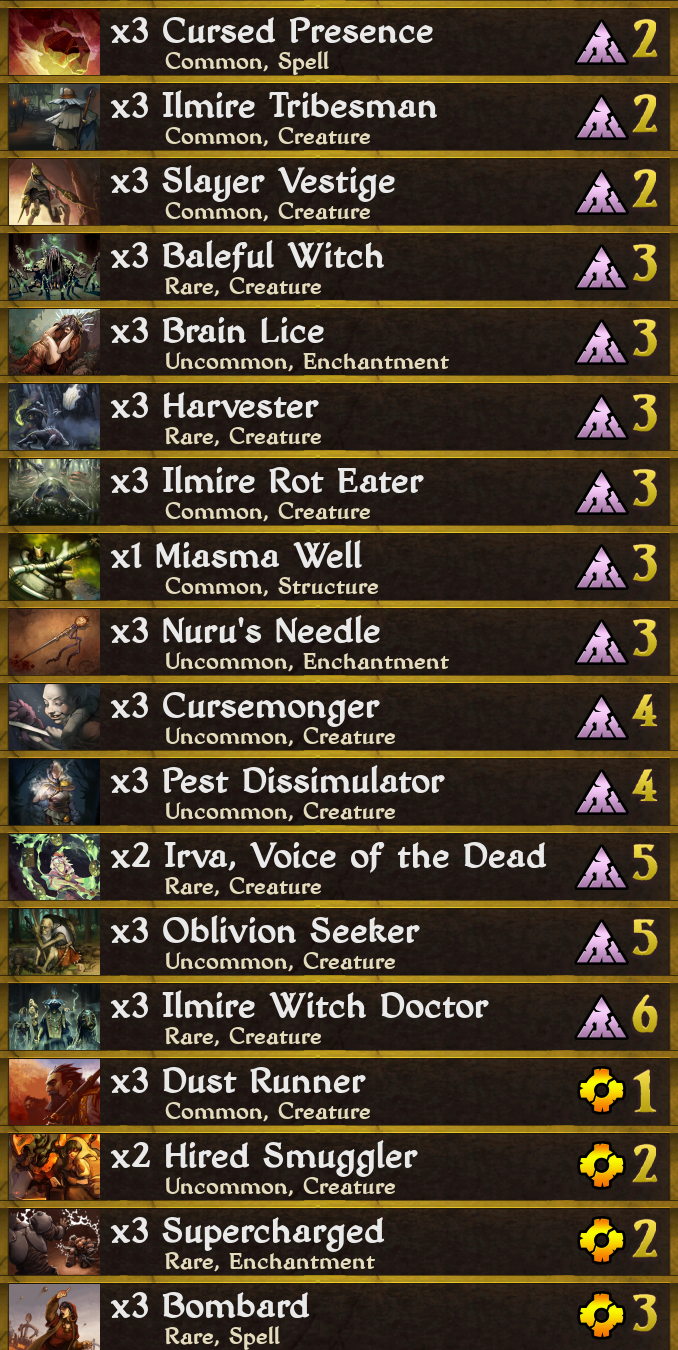 So far this is the best version by far, though it suffers a bit against aggro, it should fare pretty well against most mid-late game decks. Most scrolls in here, if played right almost always will give positive value. It might be best to take out one bombard and replace it with another hired smuggler since bombard really isn't entirely needed that much. This is just what I'm currently using, make any changes you want this deck isn't changing anymore. Any additional changes are your preference, this deck is mine.

This deck is entirely focused around assassinating all units on the board in a quick and simple fashion. That is the mindset you should have while playing this deck, since most of the scrolls in the deck have an on hit/on-play bonus effect. The best way to use this deck is to place all the hard to remove units before playing any high damage threats/slayer units. Not only will your opponent have a hard time dealing with what is on the board, but the will also have a hard time keeping anything on the board which heavily counters combo decks.

Against growth, don't be afraid to place any and all four health unit in front as it will ensure that they can't get to the 'sticky' units without the help from an enchantment or structure that buffs their damage.

Against decay, if at all possible maintain board control at all points in the game. The obvious weakness in this match-up is the amount of units that the opponent will stick to the board and refuse to give up. When the opponent plays something big and hard to remove try and not deal with it until the answer appears in your hand (aka rot eater is played and you have baleful witch and cursed presence or a cursemonger is on your side and they play a witch doctor and you have the same hand). This match-up all relies on the cleanest removal and not allowing anything to stick on the board. If you can keep more things on the board than your opponent you should be in good shape to win.

Against structures, nuru's needle is more often than not the best answer. Who doesn't want a health decrease and damage increase against structures as decay? It's also versatile as it can be used on any unit, so you can prevent those pesky high health structures from blocking the more threatening creatures from your harvesters. It turns out to be a win-win scenario in most cases it's used.

Against order, just consitently clear the board. So long as there are very few units in play, you should be fine against most of their units. Curse and ranged attacks tend to deal with order's threats very easily.

Haven't really faced any energy decks to say how to deal with them, but I would assume that playing anything with 3 or less health would generally be a no go. Other than that, I think that match-up would go somewhat smoothly toward Ranged Decay 2.0.