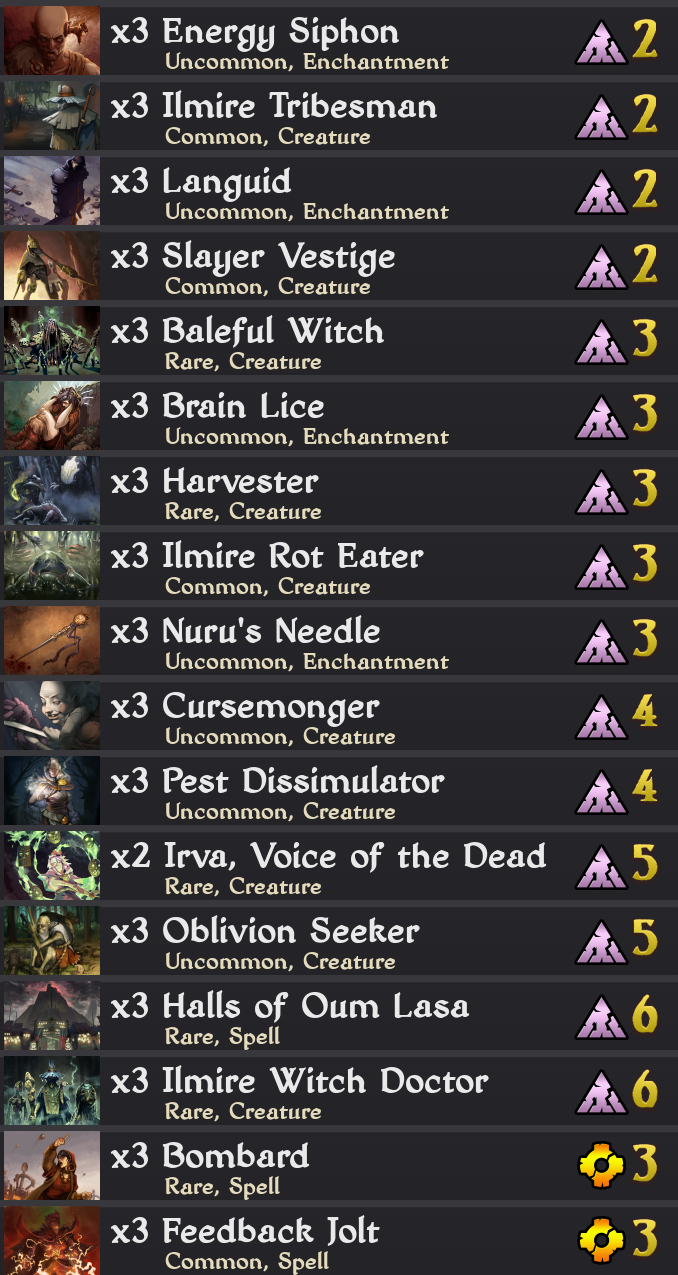 While this deck is complete there are certain match-ups where certain scrolls are dead. Baleful witch seems to be that scroll most of the time, so it might be best to replace that for another value scroll. I personally like the flexibility of it so I have another trigger instead of feedback jolt + enchants (curse + baleful witch is a bit harder to pull of without a cursemonger though).

Ranged Decay or "Jolt Attack Decay" as I like to call it is all based around ranged units to make the most of bombard + energy siphon as well as a combo deck that uses a lot of enchants to clear the baord with feedback jolt. Halls of oum lasa is there to ensure you have a energy siphon for each combo, at least until you run out of bombards and feedback jolts. The main strategy of this deck is to play it like a normal decay deck (play ilmire tribesman in front of rot eater, play languid on low cost threats, etc.) while spreading out enchantments to prepare for feedback jolt. I find myself sacrificing the combo early game more often than not because decay has such solid creatures that can keep board control by themselves. Most of the time it's not needed until mid-late game (approximately just after the first deck cycle) it's best to play halls of oum lasa around that point as well to prepare for heavy loses that can be replayed. Think of this deck as a decay deck with a surprise sudden eruption that can hurt all enchanted units (units with stag heart, piercing projectile, overdrive, earthen mirth, champion ring, languid, nuru's needle, etc.)

This deck more or less strenthens decay's match-up against energy due to the flexibility of languid and nuru's needle that they can be played on structures. The only downside it that energy siphon must be played on a creature, so in order to trigger feedback jolt against an energy deck such as MES, you must wait for them to play a creature. Luckily, there is usually at least one or two great targets for energy siphon, it may just have to wait a while before energy siphon can be played.

The only real weakness of this deck is aggressive decks when this deck gets a terrible opening hand. If it can hold out this deck can turn around since it hits its peak mid-game and slowly falls off late-game (at least if no halls of oum lasa is out), but most of the time aggression really hurts this deck.

Have fun with this combo decay deck