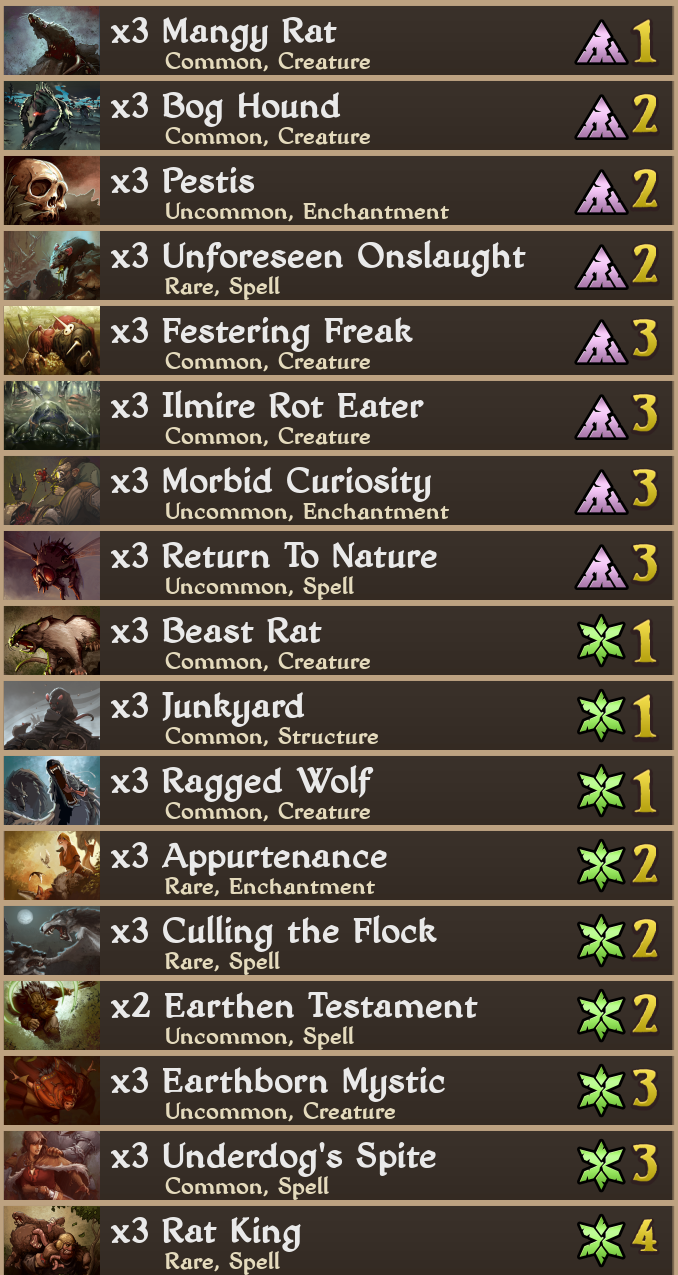 Hello I'm Vulkenhyn and this is the Rat deck I've devised with much testing.

This deck is a early to mid game deck that exerts it's power on the battlefield by flooding the board with small units and using those units to prock powerful enchantments. The deck also makes use of volitile mass effect spells to eliminate large swaths of troops in a single blow (unforseen onslaught) and unexpectedly sieze wins (culling of the flock).

the contents of your starting hand is extremely important with this deck. You sould be striving to have either a majority of one color in your hand or powerful combination, such as ragged wolf/unforseen.

It's also important to take into account weither or not you are going first. This comes into play most against growth were vaettr is an extremely powerful one drop that must be delt with on your next turn, generally with ragged wolf or return to nature.

Early game sacing is one of the most important aspects of Scrolls in general but it's doubally important in multi resource decks because there is a real chance of ending up with a bunch of useless cards in your hand. It's hard to give advice on how to build your resource pool with this deck because it's incredibly situational. There are times where you'll need to go up to 3 of a mono color because those are the cards you have in hand. Other times you'll have a mix but you always want to be striving for 2-3 growth/decay each and 2 wild. That's the top of the curve for this deck.

Early board presence is extremely important as well. This deck, by nature, is a snowball deck. If your opponent establishes extremely good early board presence then there is a good chance you'll just lose. I've tried to mitigate that and give as much come back potential as possible but many of the removal cards that are generally used as a come back mechanic are too costly, weither by resource or blood, to really viably run.

Mid to late game you want to have as many units on the board as possible. Its paramount to apply constant pressure. Focus the enemy units with an emphasis on relentless and lobbing units because these units can take out large swaths of your minions.