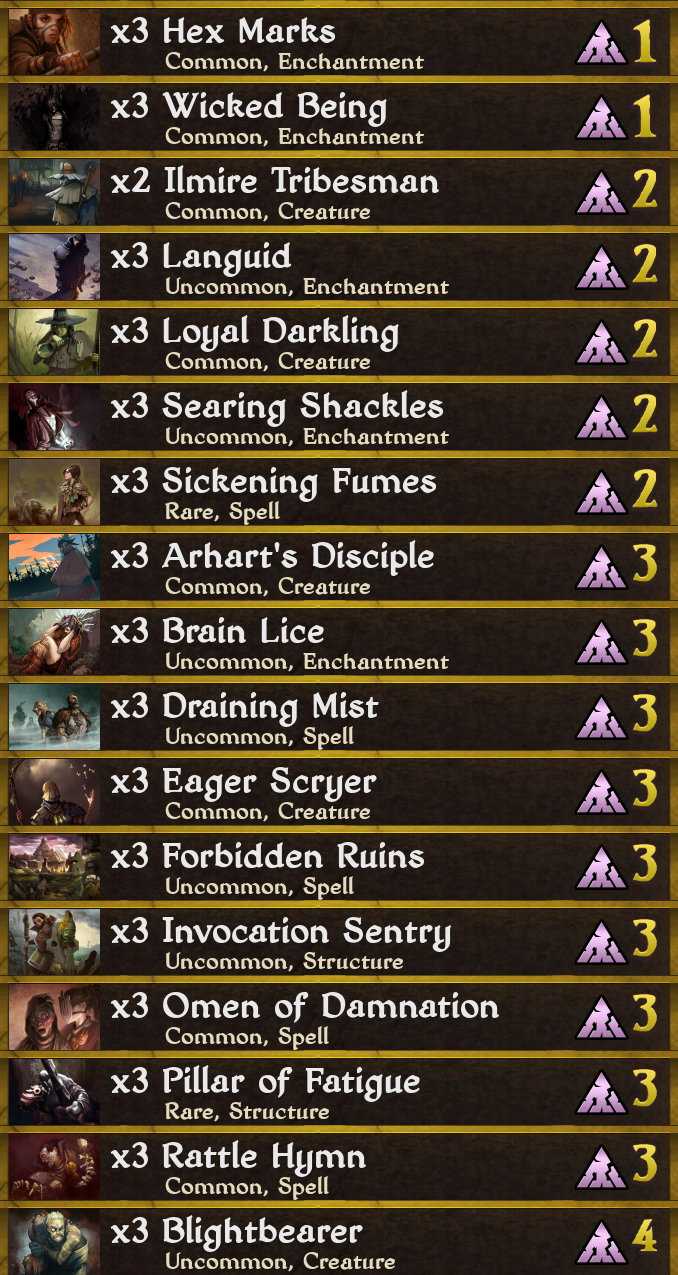 When mojang changed Invocation Sentry to mill like metal wonder, I knew it was time to make this deck.  It is focused around dealing direct idol damage and almost entirely ignoring the enemy's board.  I have a video commentary here:

The basic idea is to get as many invocation sentries down as you can, and mill them to death.  You stall with pillar of fatigue (with scryers to supplement your draw), draining mist, and sickening fumes.

This card was changed recently. It used to deal 1 damage to each of your idols when you played a lingering spell (applied to you and your opponent). This wasn't that great, since it deterred opponent lingering spells, but did not help you deal direct idol damage.  They could just opt not to play lingering spells, and then your are restricted from playing the spells that you really need.

Now, it is beautiful. Whenever anyone plays a lingering spell, it mills an opponent idol for 2.  With this change, I think there is now enough indiscriminate idol damage to mill an opponent down to zero (see video).

This gives you a persistent way to stall their board. In the games I played, I always ended up completely ignoring the middle three rows, playing only on the top and bottom rows.  With pillar of fatigue, they have to give up attacks to take out your units. The other stall is great (Draining mist and Sickening Fumes), but those only prevent one wave of attacks each. I thnk I only won the games I did because of the cost this scroll put on moving their armies out of the center.

With all the idol damage scrolls needed in this deck, you can't afford to actually put in enough scrolls to even try for board control . This is a very card-efficient way to make them lose attacks, and the fact that it leaves their board alive is no problem! Blockers are meaningless against this deck.

If I could have 6 of these, I would. As above, it makes them effectively lose their attacks.

This helps give something worth playing on the way to 6 resources. It also combos nicely with pillar of fatigue. If you put it in front of their units, they have to choose between poisoning themselves or moving out of the way (increasing the countdown via pillar of fatigue).  At which point you move in front of them again.  If they keep moving, you win, because you stalled without using cards.

Gives you card draw (which will be lacking if you can't get pillar/scryer going) and nullifies a creature.  The card draw is the main reason I have this and not soul steal for early stall.

I almost consider this a core card because it tutors for lingering spells.  Invocation sentries have been my main source of damage so far in testing, and this is more fuel for the fire. If it takes out Halls, all the better.

It fared well against tempo order and necrogeddon decay, but I think that was almost entirely down to the fact that they didn't understand what I was doing until their idols were critically low.  I suspect quake, burn, and mango speed combos are going to be ruinous for this deck, so clearly you have to wrap it up by mid-game.

This is a work in progress, but I think it has potential.  One opponent nearly killed himself with necrogeddon on video!  I'm not so sure I need hex marks, but I'm not sure what I would put in to replace it.