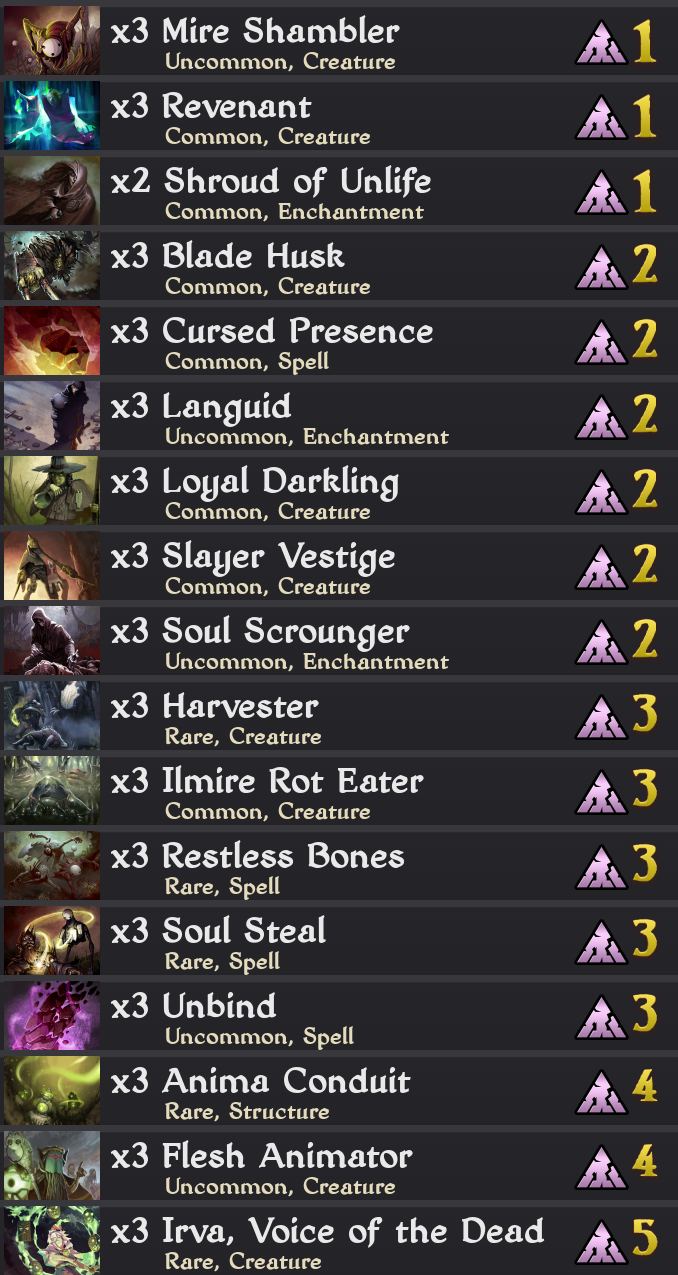 This is my Undead decay deck I've been using ever since the change to Anima Conduit and Soul Scrounger.

When this deck is working, it is amazingly fun to play.  Some of the most fun I've had in Scrolls in a while.

How to play this deck: Key Scrolls

This deck thrives by taking advantage of Anima Conduit.  I cannot stress enough how important having one of these out in the field is.  Make it a goal to get at least one Revenant out of the Conduit, and it will have done its job.  The 4 health change is very significant.  No longer can it be burned, which used to be a very quick way to shut this Scroll down.

Positioning on Conduit is very important.  You want to protect it - never use it as a wall.  The best spots to put it are on the very back hexes in the 2nd, 3rd, and 4th rows.

You need to save every single Restless Bones you can.  It is a game winner, and a board clearer.  Nothing is better than having a bunch of Revenants pop out of your conduit and boosting them all to 4 attack.  With an Irva on the field and some extra undead - the effects of this scroll can be devastating. Don't forget, with a Revenant in hand - you have a hasted copper automaton at your disposal.

Irva, Voice of the Dead

Extremely key scroll to the deck.  I have 3 of her in here because I believe she is that important.  You really need to think turns through with her.  Pay very close attention to attack order and play the turn out in your mind when she will be making her 2 damage attack.  Remember, Harvesters that attack through units make her trigger each time it does damage.  She is probably the easiest unit to make a mistake with.  Double check your plans with her EVERY time she's making her attacks - it is very easy to become confused on the progression of damage.

This is another key card.  Your units will be dying a lot. When playing against energy, I love to drop a Rot Eater right as some Revenants are dying, or I sacrifice a Darkling (which then spawns a Revenant). You can easily turn out a 5/5 rot eater out of nowhere.

Another key card.  Like I've mentioned before - you are going to have a lot of units dying. Harvesters reach their cooldowns very quick in this deck.  Combined with the newly reduced in cost Soul Scrounger - these can attack out of nowhere.

I've grouped these together.  Shamblers are your work horses here.  You need to learn how to control them effectively. Their movement effect can be tricky to master with Revenants on the field. Remember attack order at all times. Revenants will disappear after they attack, leaving a possible hole in your formation that you didn't predict.  Now your shambler moves there, and your plans are all off.  Pay attention to your shamblers - and try keeping them in either the back or the front row, where it is easier to manipulate them.

As for Soul Steal, it's yet another way for you to take advantage of Soul Scrounger, and is just an all around good value scroll even without it.

There is pretty much only one use for this guy, and it's playing him with Restless Bones. You can get away with playing him behind a Rot Eater sometimes, but these guys are pretty much used as surprise four damage that goes well with an Irva, Rot Eater, or Harvester on field.  Good for finishing games or clearing rows.

This guy can do work.  Be careful playing him on turn 2.  Make sure you have a plan for what to do if your opponent is able to attack into him before his cooldown is up.  For example, having a Languid in hand.

Scrolls that can probably be swapped out:

Yes, Soul Scrounger.  You have to be careful with this one.  At its new 2 cost, I find it much more playable.  Almost every time, it should be played on a Harvester, or in some cases a Rot Eater.  Don't play it on a unit unless you are making something die that same turn which triggers the Soul Scrounged unit.  Otherwise, it's easy to lose value with this card.  Played correctly, you can really surprise your opponent and then basically have a Fleetness'd unit out on the field.  Pretty fun stuff.

Yes, Unbind.  While this may be a scroll you want to swap out, I've found lots of utility with it in the current meta.  Potions of resistance are everywhere, as are enchanted growth creatures.  This can shut that type of play down very quickly.  Otherwise, just sacrifice it.  I almost always save these vs Energy.

This card works great with the "It's ok if my units die" philosophy of this deck.  Not only does it help with blocking rot eaters, it's great for hasting Flesh Animators or Rot Eaters with Restless Bones.  Good stuff.

This is more of a removal tool.  A lot of times, opponents tend to underestimate a Darkling presence on the field.  Surprise, he does 4 damage.  Combined with Brain lice, it's often a 5 cost removal in one turn. It's also a good way to remove pesky high health structures.  All in all, this scroll could probably be swapped with something else, but I prefer using it.

In my experience this guy can be just a bit too slow for the deck.  You have to play him AND have him survive for two turns to get any benefit from him. I've tried him in the past and he's really been hit or miss. I personally feel there are better ways to spend your mana and scrolls.  I will play an Anima Conduit over Flesh Animator any day of the week.  Not to mention, he counts down enemy Undead.

That said, he has some great combos with Soul Scrounger / Soul Steal, or Shroud of Unlife / Restless Bones.

This scroll is a way for you to keep your undead on the field long enough for them to attack.  It's not a keeper 100% of the time, but more often than not, you can shut down your opponent's plans very quickly with this - and keep up on card advantage.  That said, it doesn't feel like a 100% must include for the deck, so maybe you'd like something else instead.

His HP is a little low, but having extra bodies on the field to die is never a bad thing. I played this deck for a long time without him and it ran just fine. He's more often than not just death fodder, and rarely gets to attack. That said, I've recently become convinced he is a better addition than Brain Lice, which I was previously running.

I have mixed feelings about this in the deck.  I often find myself sacrificing it in favor of units on the field.  This deck feels like it becomes way too slow if you spend a turn dropping a Scavenger Construct - not to mention the many ways it can be eliminated easily by Energy.  Anyway, I've tried putting it in the deck and so far prefer not to.  When it's working - it is pretty tough for your opponent to deal with.  Very strong against Growth and other Decay opponents.

Yep.  Wicked Being.  Surprisingly, it can so commonly be that extra 2 damage you need to win the game.  If you're doing well with the deck, you will usually be ahead on idol damage the entire game.  I have tried it a few times and it actually made a difference more often than you'd think.

Another way to finish the game.  Watcher is played more often than Necrogeddon.  Don't forget, sacrificing a Darkling next to one of these spawns a Revenant - so you don't lose complete value of the Darkling unit.  Combine that with an Irva or Rot Eater on the field, and saccing a Darkling next to a Watcher suddenly becomes a great idea.  And Revenants?  Ya.  They trigger Watcher, too.

She's amazing, and if you have her out on the field you may have sealed your victory.  The issue with her, of course, is her cost.  I find this deck ramping up higher than you might expect with Brain Lice, Languid, and the extra Revenants - but 8 cost may still be too much to fit her in.  That said, if you have an established board and drop her, your opponent is in big trouble.

This is more of an experimental addition.  It is much more situational than a lot of the other scrolls, but it can be a HUGE burst of surprise damage - most often saved to clear an entire row with a Harvester - or just win the game.

I hope these explanations help you understand how this deck is meant to be played.  All in all, it is a VERY fun deck to play and makes for exciting turns.  The fact that I've had some success with it in the 1600+ ladder makes me even happier with it.

As an afterthought, don't give up with this deck so easily. If you end up short on idol damage by the time a more late-game oriented opponent gains control, you have a few tools available to get those last points of idol HP.

edit: Through playing this deck a lot, I've found out the bug where Necrogeddon spawns Revenants from all Anima Conduits regardless of conduit health, and worse yet - they are not hasted and take up husk spots. Though people seem to have been aware of it, I did not find a bug report on it, so I made one here: https://bugs.mojang.com/browse/SC-923[2] . I've taken Necrogeddon out of the deck for now, as it kind of loses its power without husks spawning properly. A good swap would be Grisly Grafts or Flesh Animators.