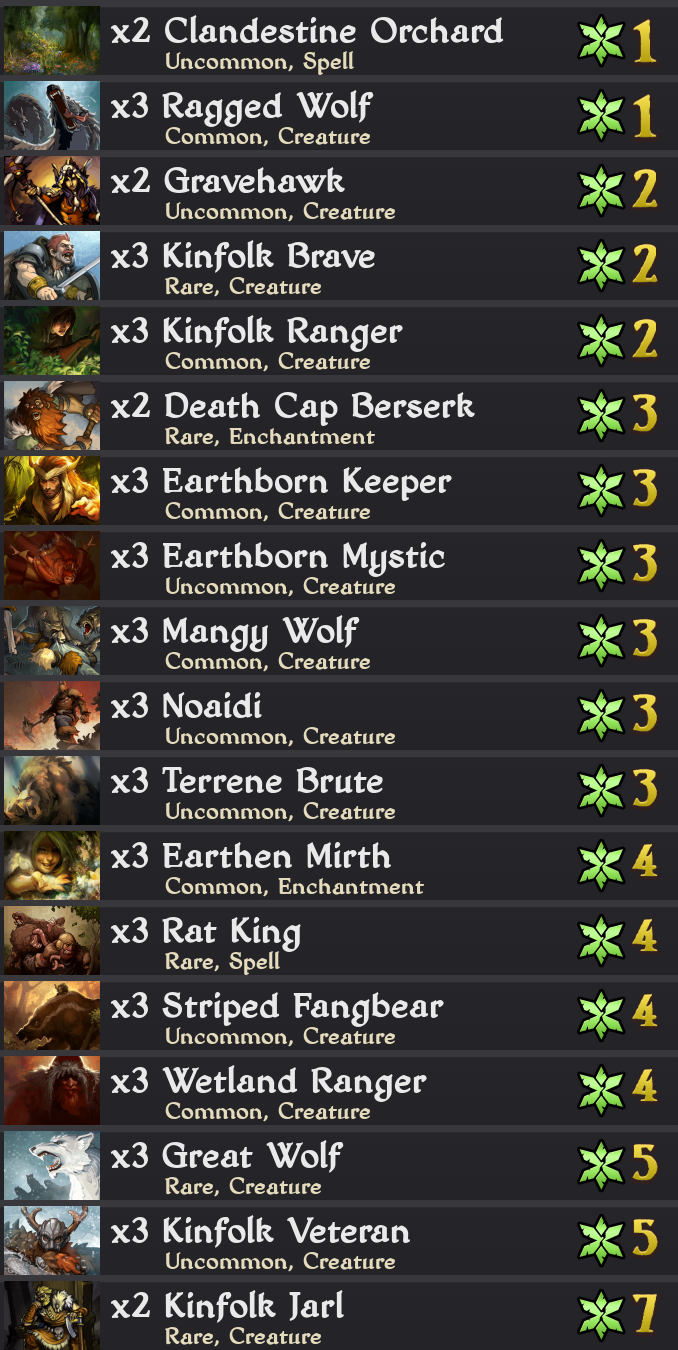 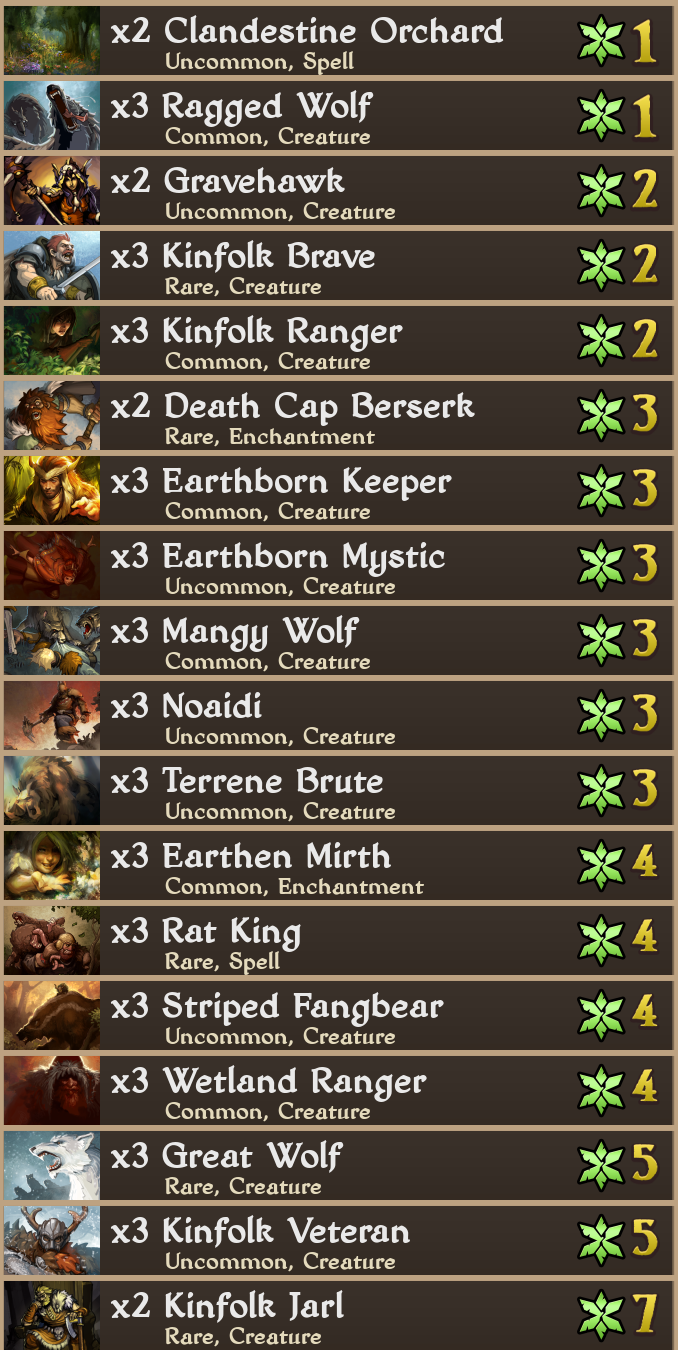 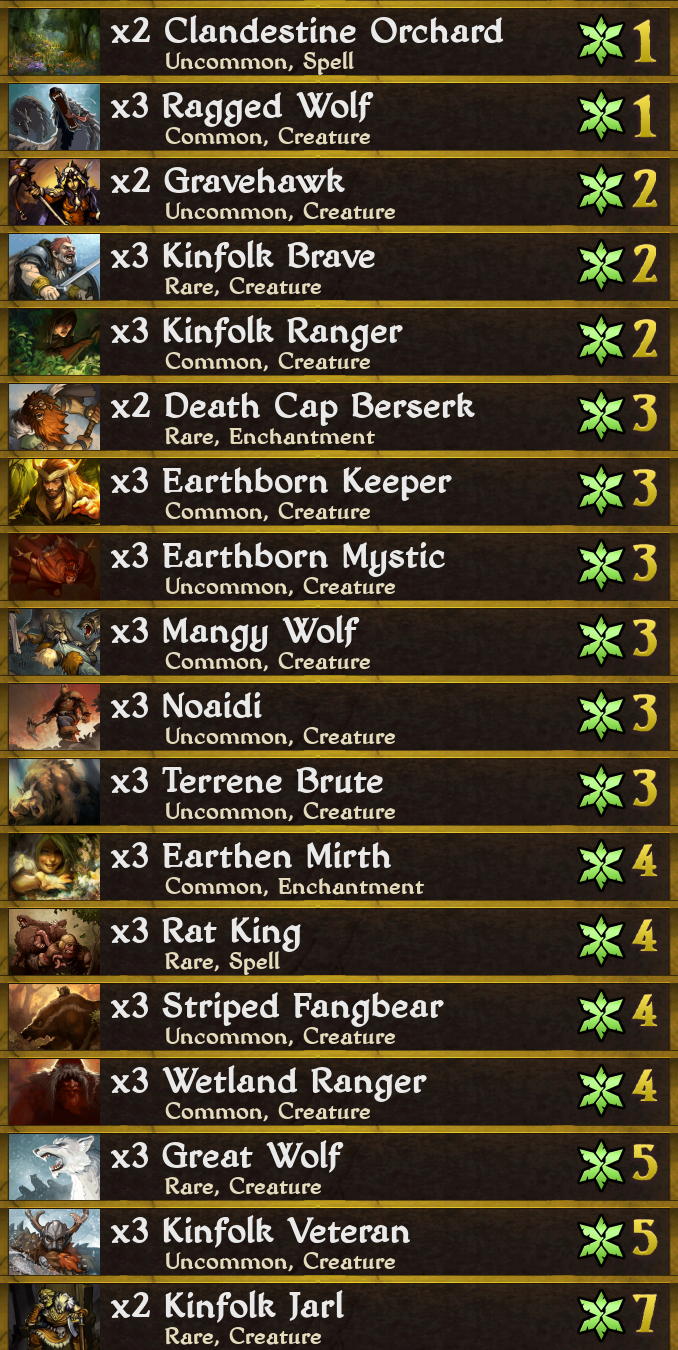 Orchard Growth started out as a very creature-heavy Somata deck, designed to take advantage of the awesome Terrene Brute and Somata Shift especially.

The deck now no longer runs Somatas due to the drawbacks of 2 Health in the current metagame but still sits pretty at a healthy 40 creature count + 3 Rat Kings, possibly one of the highest creature counts in a competive deck so far. The abundance of creatures allows the Waypoints subtheme of units triggering off other units coming into play to shine (Orchard, Brute, Keeper) and also allow for nice value for creatures-buffing-creatures effects (Great Wolf, Jarl, Wetland Ranger).

In one of the earliest iterations, the underplayed Clandestine Orchard entered the deck on a whim and has performed awesome, so much that the deck has now started to shift in towards utilizing the Orchard more and more, especially with a heavy focus on Relentless creatures that work well the countdown reduction from Orchard.

The deck performs spectacularly in the Growth mirror, mostly due to Orchard and how its cheap cost enables multiple creature plays the turn it is dropped, giving you multiple extra attacks often clearing out the opposing creatures that could potentially benefit from Orchard lingering.

After that initial turn, Orchard heavily favors the player with board position (that would be you), often acting as close to a five turn Rallying for 1 cost (!?!). Truly, this must be one of the hidden gems of the current meta game even though the scroll has been around in a form close to its current iteration since the Waypoints release in Beta.

The balance of between 2 and 3-drops is still a work in progress, Nogs are potential future includes in the deck if it seems to need more 2-drops. I've also been eyeing Frostbeard, haven't put that scroll into a deck since Alpha. :)

The deck started off 9-0 in Ranked on release night, we'll see how it does after this. :)

Update: Now 14-1 in Ranked, lost to Grahan playing Midrange Growth after he dominated early and dropped Urhald after I stabilized somewhat.

Update #2: 19-2 in Ranked now, lost to Cantor playing Growth. Got punished for an early Orchard as he had Brother as well as multiple Ragged and Veterans.

Somata had to go eventually. *sob*

I wanted to lower the curve a bit and have more power early so I put in Kinfolk Rangers instead. A lot of the matches vs Growth came down to early Braves and Keepers and having only 2 Health on the Somata guy was a big problem.

Deathcap is very good even though it messes with Mystic a bit. I actually most often play it as a 3-cost Growth Spark!

The deck is now officially known as Orchard Growth - that scroll is working well above expectation in the deck.

Ragged just have such good synergy with everything (Brute, Great Wolf, Mangy, Orchard, Mirth) - except for Somata! :) Still seems like a risk worth taking.

Halls of Oum Lasa is a bit of a nightmare and the draw shouldn't hurt either. Vilda does very little in this deck.

-3 Brother of the Wolf

Best change. Never realised how good Keeper is in this deck, easily 2 power each turn and is also great with Rat King and Earthern Mirth.

-2 Sister of the Owl

Needed a good way to deal with Gallant Defender, and wanted to add Jarls for more relentless with Mirth and also a very good draw off Somata Shift (4/2/2 Relentless with two more abilities for only 3 Growth is some value). Still do not have the balls to go Urhald...