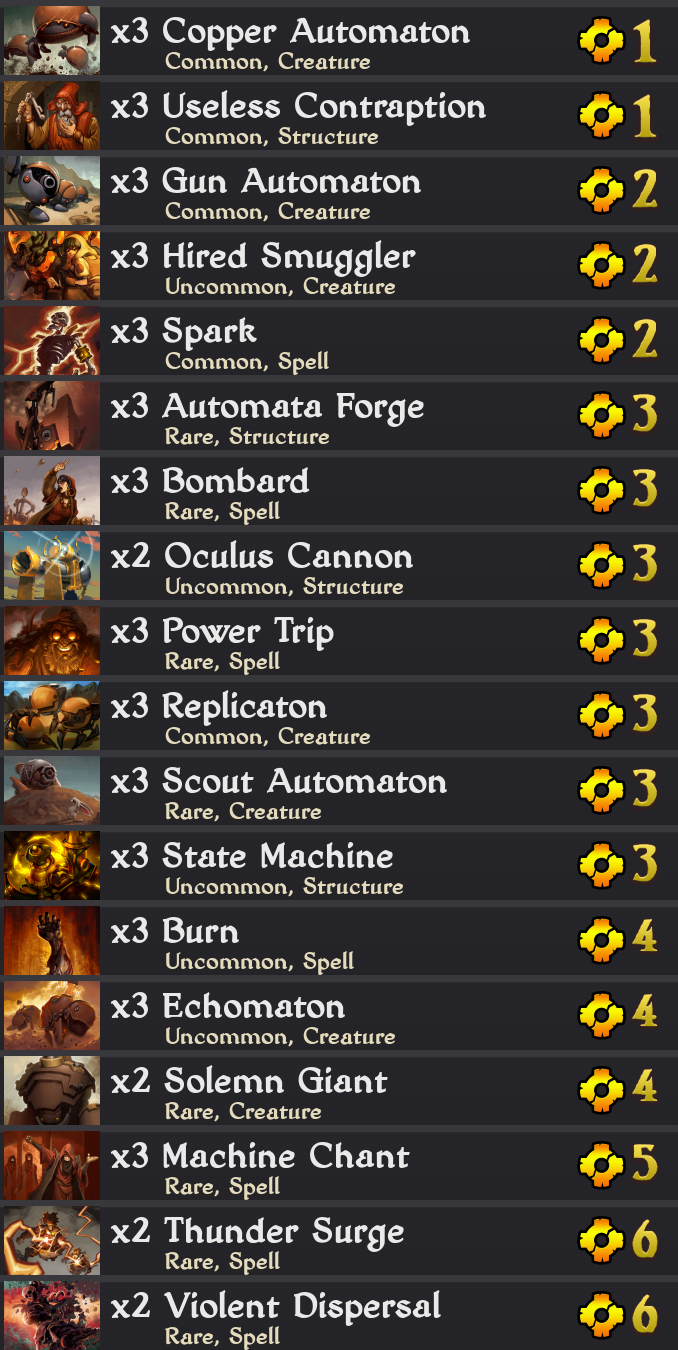 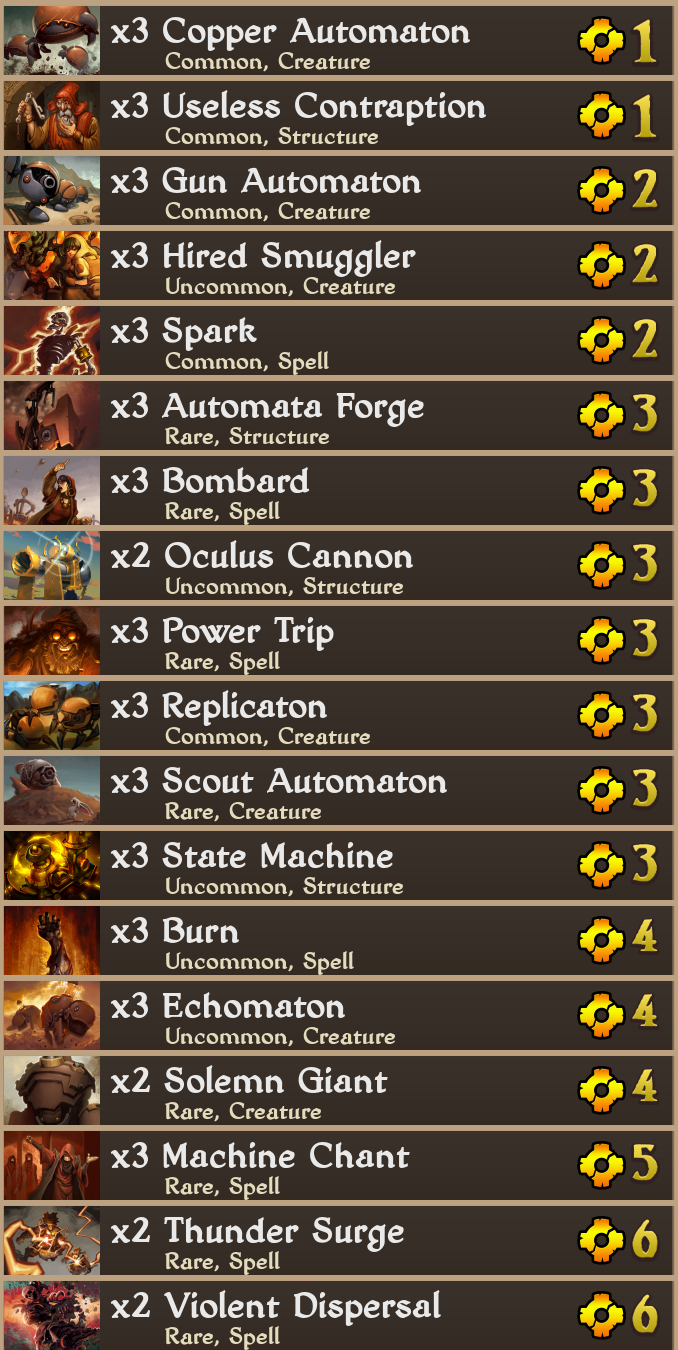 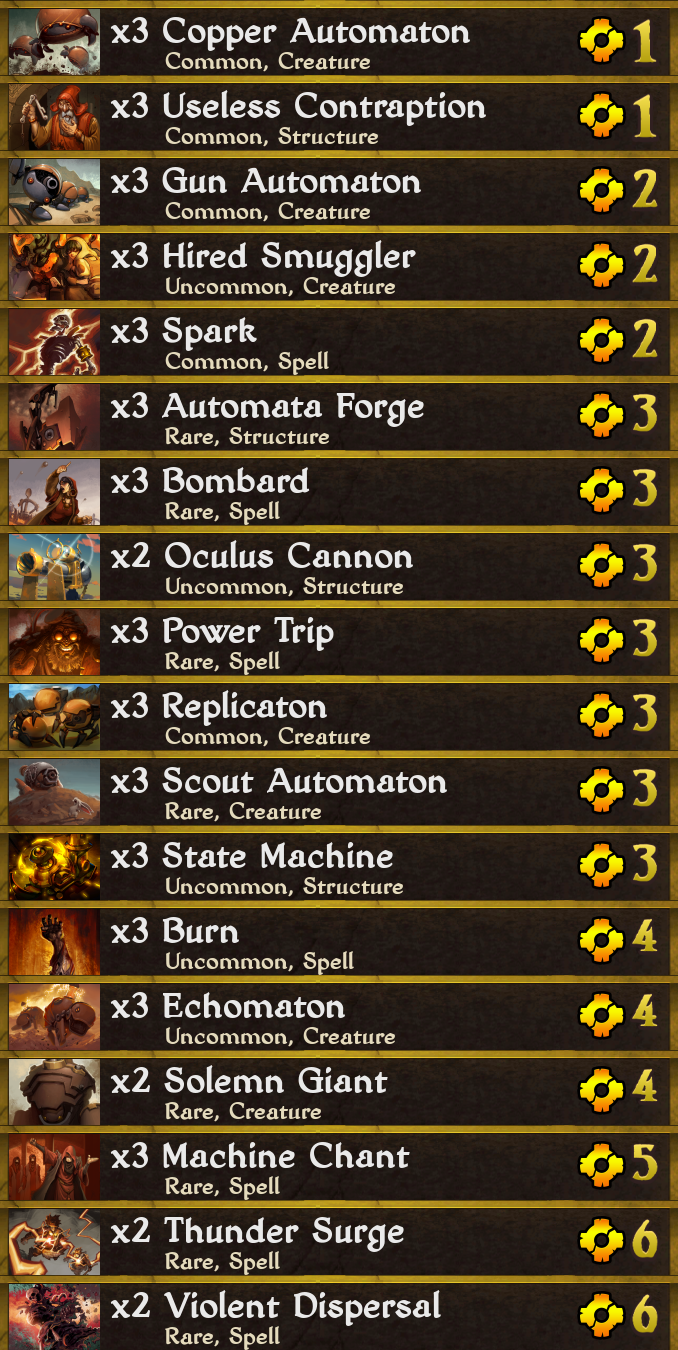 Automatons have been a favorite deck of mine since replicaton and echomaton were released and the idea of a late-game deck that would excel in the early game through the board grabbed my attention. My original version of the deck was built half for fun and half as a counter to late-game growth. It turned out that it was also pretty good against energy so it worked well during the powertrip era. Energy is such an adaptive resource that it was able to survive a couple metas after the powertrip nerf until the nerf to echomaton really killed the deck. With both of thoose scrolls back (albeit weaker versions) the deck can thrive again.

3x Copper Automaton- Copper is the king of the aggro matchups and works out great for willing the opponent to activate spells. With scouts can take out every unbuffed creature and deal with pesky armor.

3x Useless Contraption- Far from useless the 4 health is so very good and always good for adding to machine chant plays.

3x Gun Automaton- Standard 2-2-3 but with scout can often get to 3 and up. All around really good in all stages of the game.

3x Hired Smuggler- Good in the early game and also serves the purpose of making your opponent play spells.

3x Scout Automaton- Armor one very useful and the attack buff is amazing. One of if not the best scroll in the deck.

3x Replicaton- Scatter gunner with an awesome abillity most useful in late-game but in early game not terrible. Don't be afraid to go below 2 resources but not without good reason.

3x Automata Forge- Good in the grind game and good as a wall. Where to play forges really depends on matchup and board state but given the squishyness of our creatures front row is usually best.

2x Oculus Cannon- Only really useful with bombard or against decay but can be good for adding that little bit of machine chant damage.

3x Powertrip- Back from the dead decent in the early game for tempo swings and obviously very good in late-game. Sacced fairly often but when its good its great.

3x Bombard- Depending on hand usually sacced early game but excels in mid to late-game the "nerf" didn't really hurt it in automatons at all.

3x Echomaton- Great against energy and order decent against decay and depends on the type of growth, but all around echomaton is one of the reasons the deck works and adds even more utility to copper automaton.

2x Solemn Giant- Can be good in early game depending on matchup and very good in the late-game for both lethal and pushing on other late-game based decks.

3x Machine Chant- Don't run a massive amount of structures so not as good as it is in MES but definitely still good in certain situations.

2x Thunder Surge- Often the threat of surge will do you more good than the actual surge but good for when its good.

2x Violent Dispersal- I am not a big fan of dispersal, but with arby's and great wolfs running rampant it has proved useful since i added it back in.

Why not Scrolls? Short list of scrolls that could be run.

Machination mindset- I ran it at one for awhile and it was soo good when it worked but since i bumped giants down to two decided it wasn't worth it as much anymore. Side-note: it does work with copper automaton.

Sudden eruption- Good against growth but not friends with replicatons and usually the deck doesn't have to much trouble with the 2 health and below type creatures feel free to run one in place of surge.

Cannon Automaton- Too expensive and his heavy hitting job is just better fit to replicaton and copper automaton.

Alright thats the deck if you have any questions feel free to ask and keep on scrolling.